The activist has been identified as Manju, an active worker of the Mahila Dalit Federation, a left-leaning Dalit outfit. 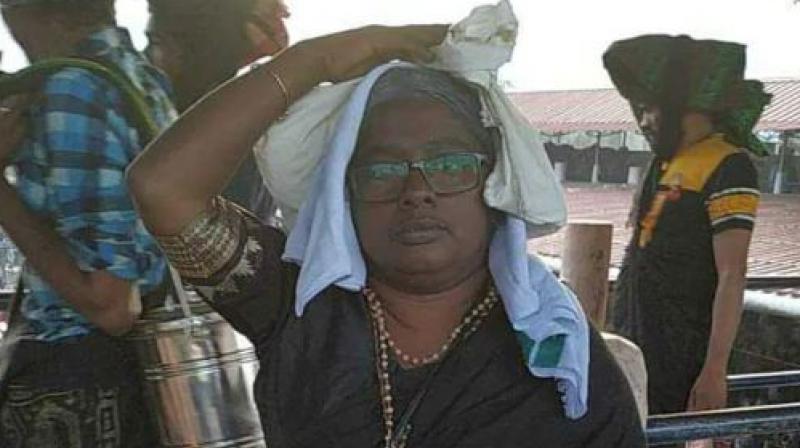 The Facebook group posted the pictures which show the woman dye her hair grey in order to appear elderly, to avoid any protests or attack on her. (Photo: Facebook)

Thiruvananthapuram: A 36-year-old Dalit woman from Kerala claimed that she entered the Sabarimala temple on Tuesday.

To prove the woman’s claim, a Facebook group called ‘Renaissance Kerala towards Sabarimala’ posted a series of videos and photos of the activist.

The activist has been identified as Manju, an active worker of the Mahila Dalit Federation, a left-leaning Dalit outfit.

In one of the videos, Manju herself is heard saying, "I entered Sabarimala on 8th January. I travelled from Thrissur by bus and faced no resistance as a young woman devotee, even from other devotees. I was in the temple for around two hours, for various rituals".

“I had a fruitful darshan of the presiding deity. I came as an ordinary pilgrim. But, of course, to dodge protestors, I dyed my hair white and pretended to be an aged woman. Nobody noticed me and I will continue my visit in future also,” Manju added.

The Facebook group posted the pictures which show the woman dye her hair grey in order to appear elderly, to avoid any protests or attack on her. Though police said her pictures show she made it to the temple dodging protestors, they are yet to confirm it.

Interestingly she is one among the 20-odd women who unsuccessfully tried to enter the temple in October last and right-wing activists had attacked her house in Kollam in south Kerala.

The state government has not given out any number on how many women between the age group of 10-50 years have entered the shrine.

The Supreme Court in September ordered the lifting of the ban on women or girls of menstruating age from entering the temple, which draws millions of worshippers a year.