Government to add farmers' union to MSP panel, will offer aid for deaths 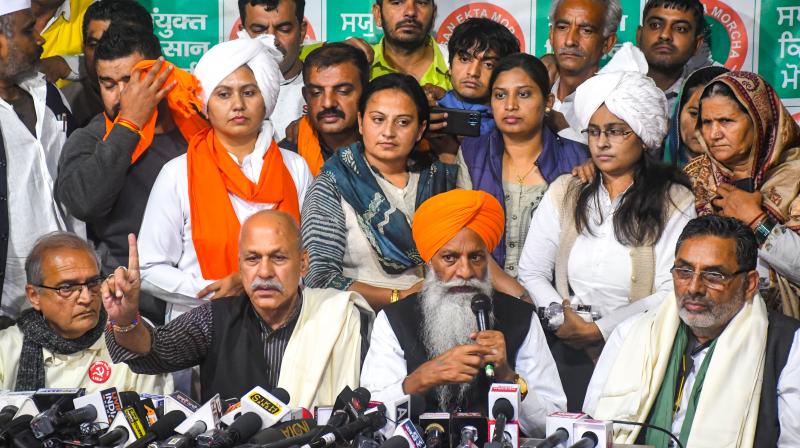 NEW DELHI: Late on Wednesday night protesting farmers arrived at a consensus to accept the Central government’s second draft proposal on their pending demands and will hold a crucial meeting on Thursday to decide on calling off their year-old agitation at Delhi borders.

A statement issued by the farmers’ unions umbrella body, Samyukta Kisan Morcha, said they were now awaiting a formal communication signed on the government’s letterhead and thereafter will meet again to take a decision to lift their “morchas”.

The statement read: “Samyukta Kisan Morcha confirms to have received a revised draft proposal from the Government of India and that a consensus has been arrived at within SKM, accepting the proposal. Now, a formal communication signed on the government’s letterhead is awaited. SKM will meet again tomorrow at 12 noon, at Singhu Border, to take a formal decision thereafter to lift the morchas.”

Farmer leader Gurnam Singh Chaduni said that the first draft proposal from the Central government on their pending demands was not acceptable to them, following which they received a fresh draft on Wednesday.

It is reliably learnt that the fresh proposal has clarified that the government will include SKM members in the committee on MSP and that governments of Uttar Pradesh, Madhya Pradesh, Uttarakhand and Haryana have agreed to withdraw cases against farmers with immediate effect. The cases registered against farmers in Delhi will also be withdrawn.

Prominent farmer leader Darshan Pal said that the revised draft was received by farmers in the morning in which the government has removed some points and added some as suggested by SKM. The day started with an emergency meeting by the SKM's five-member empowered committee to deliberate on the pending demands of farmers and on the Centre’s fresh proposal and appeal to farmers to end their protest.

Ahead of the crucial meeting of the SKM, farmer leader Yogendra Yadav said that they have reached a “decisive moment” in the over-year-long farmers' agitation against the three Central farm laws. “A ray of hope has emerged at the end of the long tunnel,” Mr Yadav told reporters.

After the core committee meeting, Mr Chanduni said, “We are in agreement with the government regarding our demands. We will decide about suspending the agitation after the meeting tomorrow. No decision has been taken yet on calling off the agitation. Another meeting of SKM will be held tomorrow (Thursday) at 12 noon."

The SKM has formed a five-member committee for a dialogue with the Center regarding pending demands of farmers including legal guarantee on MSP, withdrawal of cases against farmers registered during the movement and compensation to the families of farmers who died during the agitation.

On Tuesday, the SKM had demanded clarification on certain points in the government's first proposal, including on the precondition set for the withdrawal of "fake" cases against farmers.

In the first proposal, the government  had assured the farmers that a committee would be formed to examine the MSP on all crops. But the farmers had emphasised that only members of the SKM (in addition to officials from the Center, concerned states and agricultural experts) should be chosen. They were of the firm view that those farmer leaders who had opposed the MSP should not be part of the committee.

The first proposal had urged the farmers to call off their protest before the police cases were dropped, something they were reluctant to do.

The farmer leaders have reportedly been assured that the contentious Electricity Amendment Bill will be tabled in Parliament only after holding a discussion with them.

The farmers had also underlined the need for financial compensation (to the families of more than 700 growers who died in the protests) along the lines of that offered by the Congress-led government in Punjab -- the state has given Rs 5 lakh and a job to a family member. The BJP-led governments in Haryana and UP have reportedly agreed, in principle, to this demand.