India   All India  09 Dec 2019  43 die in Delhi as big fire erupts in a building with illegal factory
India, All India

Worst fire since Uphaar; Owner, manager held and most died of asphyxia. 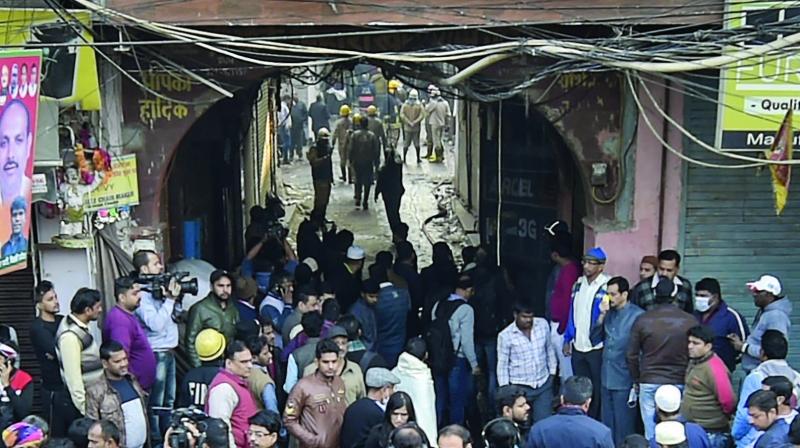 Police personnel cordon off the site of a fire as onlookers stand at Rani Jhansi Road in New Delhi on Sunday. (Photo: PTI)

Police and fire officials said most of the fatalities were due to suffocation as many people were sleeping when the fire started at around 5 am on the second floor of the building that did not have fire safety clearance. Those awakened by the fire, suspected by officials to have been triggered by a short-circuit due to “internal system” trouble, had to struggle to escape as the exit routes were partially blocked and many windows were found sealed.

As the building lacked proper ventilation, most of the people died due to asphyxia. National Disas-ter Response Force deputy commander Aditya Pratap Singh said they had detected carbon monoxide (CO) in the building. “The entire third and fourth floors was engulfed with smoke. The content of CO was more.” He said when his team started operations, it found some windows sealed.

Chaotic scenes were seen at the site, clogged with bystanders and politicians arriving in convoys. Firemen made their way through narrow lanes to rescue those trapped inside the blackened building and carried many unconscious labou-rers on their backs. At the hospitals where the dead and injured were taken — LNJP Hospital and Lady Hardinge Hospital — distraught relatives had a hard time finding their family members.

Delhi Fire Service director Atul Garg said the building in which the leather and other factories were operating did not have fire clearance and no fire safety equipment was found installed on the premises. The narrow lanes of Anaj Mandi made rescue operations hard for firefighters, who had to cut window grills to get access to the building. A preliminary probe suggested a short-circuit triggered the blaze. Power discom BYPL said the fire began due to “internal system” trouble.

The fire was first reported at 5.22 am, after which 30 fire tenders were rushed to the spot. A Delhi Fire Service official said 150 firefighters worked to pull 63 people out from the building. While 43 labourers died, many others were injured, including two fire department personnel. The injured included a minor. However, it was not confirmed whether the injured worked in the units. Most of the labourers were migrants.

Narrating the horrific incident, eyewitness Raunak Khan said people were screaming and pleading for help from the narrow window panes, which were fitted with iron railings, as they were struggling to breathe. Locals threw wet cloths at them through the windows and even gave them hammers in order to break the iron grills, but it all went in vain initially. Later, gas cutters were used to cut the grills, after which some of them were rescued.

The police has arrested the building owner, Rehan, and his manager, Furkhan, and efforts are on to track the other persons involved in the running of factories at different floors of the building. The duo has been booked under IPC Sections 304 (culpable homicide not amounting to murder) and 285 (negligent conduct with respect  to fire or combustible matter). Delhi CM Arvind Kejriwal has also ordered a magisterial inquiry and sought a detailed report within a week.

The Forensic Science Laboratory (FSL) analysed the building and possible places from where the fire could have started but could not collect any samples due to the rescue work by the fire department and NDRF staff.

An intense political blame game began after the tragedy, with the BJP holding the Arvind Kejriwal government responsible for the incident and the AAP alleging that the saffron party was doing politics over dead bodies. The Congress, however, accused both the BJP, which is power in all three municipal corporations, and the AAP over the worst fire tragedy in the city.

Prime Minister Narendra Modi described the fire as “extremely horrific” and Mr Kejriwal said it was “very, very tragic”. Mr Modi and Mr Kejriwal also announced an ex-gratia of Rs 2 lakhs and Rs 10 lakhs each for the next of kin of those who lost their lives. Mr Kejriwal also announced Rs 1 lakh for the injured and said his government would bear the cost of their treatment. The Prime Minister has approved Rs 50,000 each for those seriously injured.