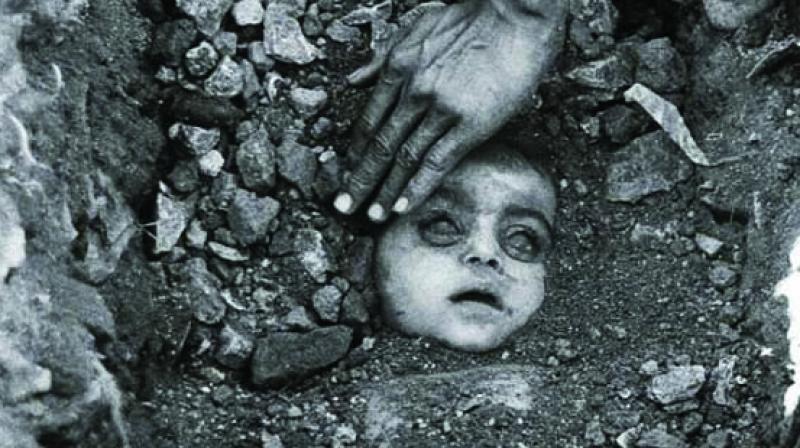 The Bhopal gas tragedy of 1984, that had left more than 25,000 people dead and over five lakh others maimed, is a sordid saga of “betrayal” of its own people by a country and an “inhumanely indifferent” administration that appeared keener on saving its skin rather than providing succour to victims during the disaster.

An “authentic” documentation of “conspiracies” hatched by “unseen forces” to bail out Union Carbide Corporatoin (UCC) boss Warren Anderson, the key accused in the horrific incident, and consequent denial of justice to thousands of victims has been made in lucid details in the form of a book titled Unfolding The Betrayal of Bhopal Gas Tragedy, authored by the then district collector of Bhopal Moti Singh, now 80.

The 279-page book had disappeared mysteriously in the market soon after it was published in 2008.

It came to light a couple of months ago when a gas victim and social activist moved a court in Madhya Pradesh seeking to book Mr Singh and the then superintendent of police of Bhopal district Swaraj Puri for facilitating escape of the Union Carbide boss from India to the USA then, shutting out all legal doors to prosecute him.

The very first page of the book under the Forward note dropped hints on the treachery of the victims done by a section of official machinery, observing, “At the same time, the Union Carbide, in tandem with a few influential officers and doctors, did all that it could do to subvert the efforts of rescue, relief and rehabilitation operations that were being done by the dedicated people and saw to it that the guilty were not punished and surviving gas victims did not even get just and fair compensation.

Claims cases of gas victims were tampered with and supporting documents were delinked and destroyed…. With passage of time, the vast resources meant for gas victims were virtually looted and misappropriated on a massive scale.…”

The author surmises the story of brutal perfidy of victims in the ‘Preface’ of the book before unfolding them in subsequent chapters.

Mr Singh who was collector and district magistrate of Bhopal and chief coordinator of rescue, relief and rehabilitation operation then, narrates in his book how the whole conspiracy to let off Union Carbide in the court in USA began barely four days after the tragedy.

The tragedy happened when lethal Methyl Iso-Cyanate (MIC) gas leaked from the pesticide plant of Union Carbide here in the intervening night of December 2-3, 1984.

Mr Singh recounted how he was directed on telephone by a secretary level officer of Union government on December six, 1984 to facilitate entry of a team of Americans, who were later found to comprise some senior employees of Union Carbide and defenders of the multinational company in the case in a USA court, into the Union Carbide factory here without disclosing the purpose of their visit to the plant.

The officer was interestingly avoiding taking responsibility for their entries.

“Whole thing looked mysterious and fishy and was against the declared policy of the government,” Mr Singh noted in his book.

The team lead by Warren Woomer who had earlier worked as manager of Bhopal unit of Union Carbide, had stayed in the plant for around a month.

The team had “utilized” their post-tragedy stay in the plant in gathering material to prepare strong defence for the Union Carbide and to weaken the case of our government in the court in USA, he revealed.

“Why did not anybody ask as to in what capacity had Woolmer worked and conducted enquiries for Union Carbide Corporation, after the gas tragedy,” the book wondered.

Similarly, the author who handled “arrest” of Warren Anderson in Bhopal on December seven, 1984, narrated how the whole exercise was reduced to farce.

He was called by then chief minister Arjun Singh on December seven, 1984 for a meeting to discuss on receiving Anderson in Bhopal airport and his subsequent arrest.

Anderson was taken to Union Carbide guesthouse here from the airport and a couple of hours later he was against brought back to Bhopal airport to fly to New Delhi by a state plane.

Anderson was later allowed to catch a flight to Bombay from Delhi and then escape to the USA the same day.

Similarly, there were attempts to scuttle the directive by Madhya Pradesh high court then to collect samples of the killer gas that caused deaths of the people. Alleged machinations by some quarters had led to collection of only 300 gm of samples each from five tanks of MIC in the plant as against the 5 kg of gas each of these tanks as ordered by the court.

“We succeeded in keeping the samples against all odds but I do not know whether its analysis by any credible agency was done or not”, he added.

Incidentally, later the publication of some research papers indicated that the disaster was caused by the gas which had a mixture of 28 chemicals and MIC was one of them. Hydrogen cyanide, used in chemical warfare, one of the toxic gases present in the mixture was instrumental in deaths of people.

Even, there was a mess in distribution of ex gratia to the victims depriving hundreds of gas victims of compensation and benefitting many fake victims.

A large number of the deceased in the tragedy had remained unidentified depriving their kin to get compensation, due to indifferent laxity by the officers concerned.

No proper records of disbursement of ex gratia were maintained causing leakage of the funds allotted for the purpose, the book said.

He described how people unrelated to the incident were produced as witnesses by government of India in the USA court then and how some contentious versions of Union Carbide given in the court like inspection of the plant by officers concerned in India two weeks before the tragedy were not contested by Indian government, thus weakening its case against the MNC.

“If anything was regrettable, it was the agreement for a paltry sum of only 470 million dollars in full and final discharge of all civil and criminal liabilities,” Mr Singh said.

“Thus the Union Carbide Corporation of Warren Anderson won and Indian government and Madhya Pradesh government lost,” he noted in his book.