The idea behind launching a winery is to bridge the consumer-producer gap and thereby encourage the farmers to continue the framing of kiwis. 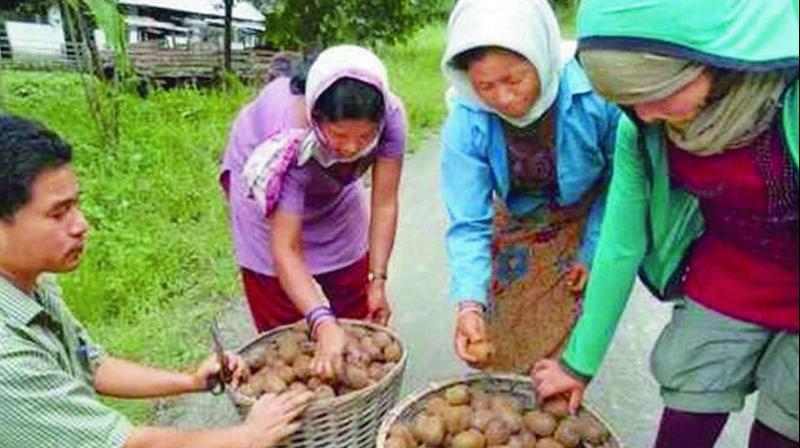 Women bring baskets of organic kiwis to a collection centre.

Guwahati: India imports 4,000 tonnes of kiwi fruit from New Zealand, Italy and Chile annually, but farmers in frontier state of Arunachal Pradesh, who have been growing kiwis for decades, are struggling to find buyers and forced to sell their produce at 30 per cent lower than the price commanded by the multinationals.

However, some local entrepreneurs have come together to launch the first organic kiwi wine of the country in an attempt to keep kiwi farming profitable and prevent farmers from running into losses due to rotting of produce.

The idea behind launching a winery is to bridge the consumer-producer gap and thereby encourage the farmers to continue the framing of kiwis.

Arunachal Pradesh industry minister Tamiyo Taga, who recently launched the winery, said, “This winery is a blessing in disguise for the farmers. Now migrating to horticulture at the foothills of the Valley will augment the economy of farmers. The marketing and storage woes will be addressed by the winery.”

The first organic kiwi winery in the world is in Switzerland. Technologies was imported from Denmark for the winery and China provided its best bottles, in which the wine was packed.

Those engaged in trading the state’s kiwis said, “The fruit is still struggling to regain toehold in the market; ironically, there are no takers as long they’re identified as locally sourced and cheaper to boot. Fruit wholesalers, therefore, have hit upon a novel idea clear domestic kiwi stock and make more money. They sell them under a foreign label at prices commanded by the imported fruit.”

However, they admit that this is not going to help the kiwi farmers of Arunachal Pradesh.

It is significant that northeast is a treasure trove of products that deserve to be better known in the rest of the country. Some of these include Meghalaya’s ginger, Lakadong turmeric and pineapple, Manipur’s black rice and passion fruit, and the badi elaichi from Arunachal Pradesh and Sikkim. Of oater, Nagaland has started producing coffee too.

What is more worrying is that many of the traditional crops of the Northeastern states, some with healing properties, are getting lost forever.

It is interesting that Prime Minister Narendra Modi had ignited the hope for the fruit farmers by announcing the agenda of his government to convert northeast into a hub of organic farming. However, the announcement is yet to see the light of the day as orange producers of Arunachal Pradesh and Meghalaya are yet to find a market to avoid dumping during the current kiwi season.

Mr T.G. Sangma, who owns an orange orchard in Garo Hills, said that they are dumping their produce at throwaway prices in the absence of storage facility or any other option.”

“We don’t do not get half of the price at which it is sold in the retail market, obviously middlemen are making money here,” Mr Sangma said that it was not only kiwi farmers in fact pineapples producers are also facing the same fate.