We have wasted 70 years in hostility, says Abdul Basit

Islamabad noted that the time has come for the two neighbours to decide whether status quo should continue or a new beginning be made. 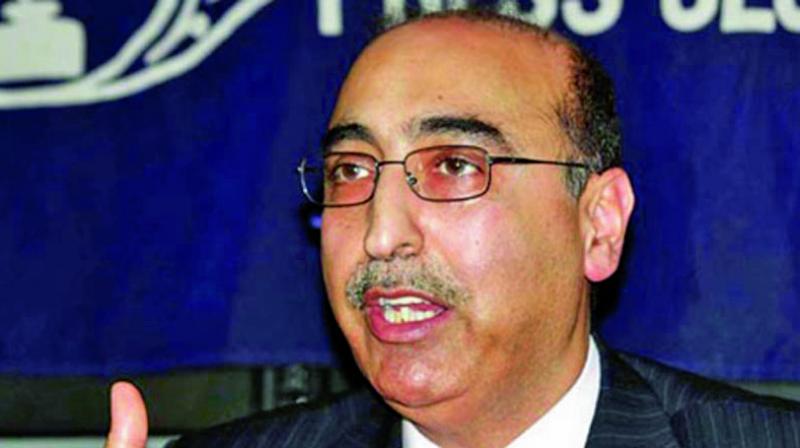 New Delhi: On a day when India made it clear that there had not been much progress within Saarc due to Pakistan’s support for cross-border terrorism and Islamabad’s efforts to block cooperation in the south Asian grouping, Pakistan struck a conciliatory note amid rising tension in ties, saying it does not want to live in “perpetual hostility” with India. Islamabad noted that the time has come for the two neighbours to decide whether status quo should continue or a new beginning be made.

Meanwhile, in reply to a Parliament question, minister of state for external affairs Gen. V.K. Singh (Retd) was quoted as saying, “It is not the government’s intention to add to the strain in the relationship with Pakistan, which is caused by the latter’s continued policy of directing cross border terrorism against India and supporting other anti-India activities.”

Calling for an “uninterrupted and uninterruptable” bilateral engagement, Pakistan high commissioner Abdul Basit said the two countries must overcome the differences in order to embark on a “irreversible trajectory” of cooperative relationship.

Maintaining that Pakistan was ready for comprehensive talks with India, Mr Basit, however, said the desire for engagement was missing from the Indian side, adding his government has patience and was ready to wait for resumption of dialogue.

“I think we have wasted 70 years of our existence. Time has now come to make up our mind on what do we want. Whether we would like to continue with the status quo or we want to make a new beginning in our ties,” Basit was quoted by news agencies, as saying.

“Pakistan does not wish to live in perpetual hostility with India. We remain positive and constructive but it takes two to tango. There are serious problems between the two countries. We cannot shy away from them but at the end of the day we can engage in purposeful diplomacy, we can realise results for mutual satisfaction and make a good beginning,” he said.

At the same time, he said, for Pakistan Jammu and Kashmir was the core issue between the two countries and finding a solution to it could bridge the trust deficit them. “We need to move from conflict management to conflict resolution and that obviously cannot happen unless we talk to each other with sincerity and seriousness of purpose,” Basit said.

Asked about whether the next SAARC summit would evntually take place in Islamabad, the MEA said there was “one standout country” (Pakistan) that had “opposed cooperation” within SAARC. The MEA also said that the issue of cross-border terrorism by Pakistan had to be addressed for progress to take place within SAARC. The MEA indicated that if Pakistan was unable to do so, it could give up its right to host the SAARC summit so that another member-nation could host it.