This is the largest seizure of new currency notes after the old Rs 500 and Rs 1,000 notes were scrapped on November 8. 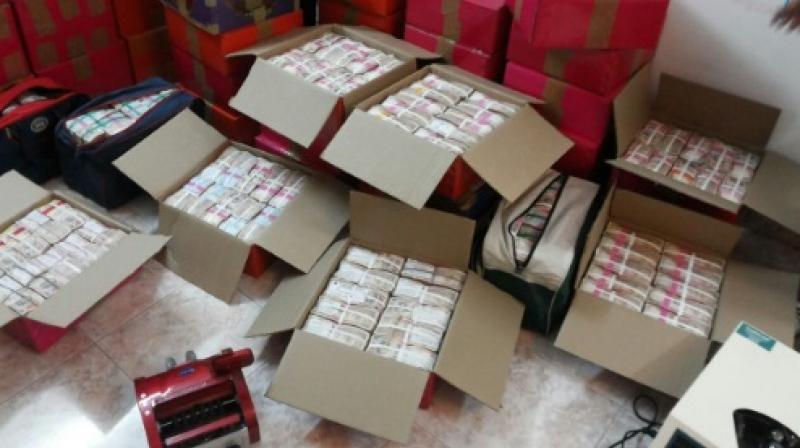 Officials said the agency was investigating how the new notes in such a large quantity were stashed by the individual. (Photo: Twitter)

Chennai: The Income Tax department has seized at least Rs 106 crore in cash, including Rs 10 crore in new currency, and gold bars weighing 127 kg in searches at multiple locations in the city to check tax evasion post demonetization. This is the largest seizure of new currency notes after the old Rs 500 and Rs 1,000 notes were scrapped on November 8. The I-T operation had been launched on Thursday.

Officials said S Reddy, a contractor working with the state government, has claimed the entire money and the gold as his own and is being questioned. "127 kg gold in 1 kg bars and Rs 96 crore in old currency and Rs 10 crore in Rs 2,000 notes have been seized by the sleuths after the operation," top I-T department officials said, adding "this is an unprecedented amount that the tax department has seized in recent times".

The department carried out the searches based on intelligence inputs about the activities of Reddy and few others for the last few days. Officials said the agency was investigating how the new notes in such a large quantity were stashed by the individual. The bundles of the new Rs 2,000 had no banking slips on them. They said the I-T teams had launched operations on at least eight locations of a "syndicate" involved in currency conversion.

The officials said a number of documents related to financial transactions, entries of gold sale and records of sale/purchase have also been seized by the tax sleuths. At least three people of the alleged syndicate are being questioned while few others are under the radar, they said. "He (Reddy) is a contractor working with the state government. He is claiming the entire cash and gold to be his own. Further probe is on," they said.

The I-T department, they said, will share the case details with the Enforcement Directorate and CBI for further probe into money laundering and corruption angles. Some bank officials are also under the scanner of the taxman.

The tax department had made the largest seizure of Rs 5.7 crore cash in new notes in Bengaluru few days ago after which two other central probe agencies, the CBI and the Enforcement Directorate, had taken over the cases to probe instances of corruption, money laundering and large-scale hawala transactions in the wake of the currency scrap on November 8.

According to a report in NDTV, the main suspect Sekhar Reddy is a member of the trust that manages the Tirumala temple in Tirupati, and reportedly visited late Tamil Nadu chief minister Jayalalithaa in Apollo hospital with prasadam from the hill shrine.

Reddy is also reportedly close to the newly appointed state chief minister O Panneerselvam, and was photographed with him during the latter’s visit to Tirumala last year.

But AIADMK rubbished the links, and said that he was not associated with the party in any way whatsoever.