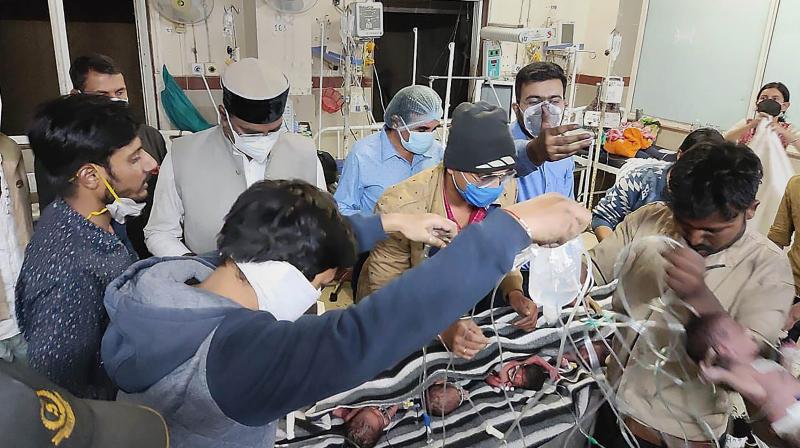 Infants being shifted to other wards after a fire erupted in the Paediatric Intensive Care Unit at Government Kamal Nehru hospital in Bhopal, Monday night, Nov 8, 2021. (PTI)

Bhopal: At least four infants died in a fire that broke out in the special newborn care unit (SNCU) of Kamla Nehru Children's Hospital here on Monday night, prompting the government to order a high-level probe into the incident.

Medical Education Minister Vishwas Sarang said a short circuit may have caused the fire and described the situation inside the ward as "very scary".

According to an official, the blaze started on the third floor of the hospital, which houses the ICU.

"Four children died in the fire that broke out in the special newborn care unit (SNCU) ward probably due to a short circuit," Sarang said.

"We reached the spot along with others soon after getting information about the incident. It was dark inside the ward. We shifted the children to the adjacent ward," he said.

Chief Minister Shivraj Singh Chouhan has announced an ex gratia of Rs 4 lakh each for the family members of the victims, he added.

The fire broke out around 9 pm and around 10 fire tenders were rushed to the spot to douse the flames, said Fatehgarh fire station in-charge Juber Khan.

A short circuit may have caused the fire, he said.

A total of 40 children were admitted to the SNCU. Of these, 36 were undergoing treatment in different wards.

In a tweet in Hindi, Chouhan said that the rescue operation was swift and the blaze is under control now.

"A high-level probe has been ordered into the incident. The probe will be conducted by ACS (additional chief secretary), health and medical education, Mohammad Suleiman," the chief minister said.

Worried parents were seen running around in search of their children.

Angry family members of some infants alleged that instead of saving the children, the hospital staff fled.

While a parent was searching for his child, some others rushed out of the hospital with their children, eyewitnesses said.

A woman who was inside the hospital said the ward was shrouded in smoke.

Kamla Nehru Children's Hospital is part of Hamidia Hospital, one of the biggest government medical facilities in the state.

In a tweet, state BJP president Vishnu Dutt Sharma also expressed grief over the incident. He said he was praying for the speedy recovery of those injured.