Ansal brothers gets seven years in jail for evidence tampering

Chief metropolitan magistrate Pankaj Sharma also imposed a fine of Rs 2.25 crore each on the Ansals 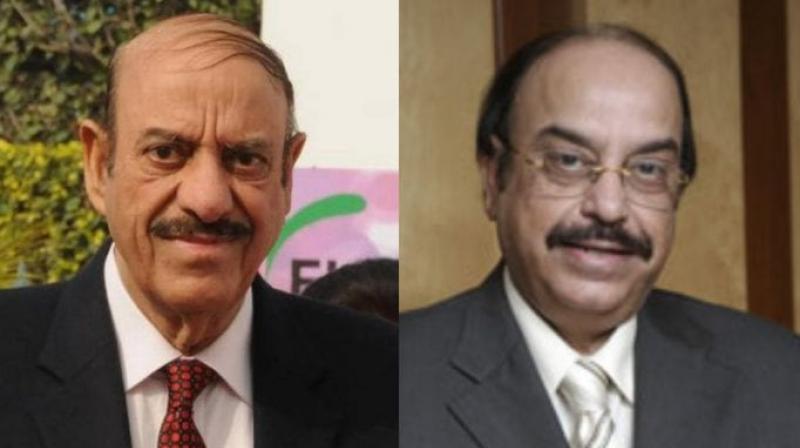 New Delhi: A Delhi court on Monday sentenced real estate barons Sushil and Gopal Ansal to a seven-year jail term for tampering with evidence in the 1997 case of Uphaar cinema fire which claimed 59 lives. Chief metropolitan magistrate Pankaj Sharma also imposed a fine of Rs 2.25 crore each on the Ansals.

The court also awarded a seven-year-jail term each to former court staff Dinesh Chand Sharma and two others -- P.P. Batra and Anoop Singh — and imposed a fine of Rs 3 lakh each on them.

“After thinking over nights and nights, I have come to the conclusion that they deserve punishment,” the judge said.

The convicts, out on bail, were taken into custody after the order was pronounced.

The case is related to tampering with evidence in the main fire tragedy case in which the Ansals were convicted and sentenced to a two-year jail term by the Supreme Court.

The apex court, however, released them taking into account the prison time they had served on the condition that they pay Rs 30 crore fine each, to be used for building a trauma centre in the national capital.

The fire had broken out at the Uphaar cinema during the screening of the Hindi film Border on June 13, 1997, claiming 59 lives.

The judge said the circumstances during which the crime of tampering was committed showed the deep disrespect which the convicts had for law, the judicial process and the victims.

“The foundation of judiciary is premised on the trust and confidence of the people and any action which is aimed to thwart the said foundation cannot be permitted and is required to be dealt with utmost strictness,” it said.

It added that the sentencing in the case must respond to the cry of the society.

While imposing fine on the convicts, the court noted that the DSLSA (Delhi State Legal Services Authority) had suggested in the Victim Impact Report (VIR) that victims had suffered "incalculable harm" and the quantum of compensation also proposed was "incalculable".

The fine was imposed after analysing the income proofs submitted by the convicts.

“Since no amount of compensation can alleviate the agony, trauma and the pain suffered by the family members of the victims, however, compensation in the form of money can provide some succour to them,” the judge said.

Rejecting convicts' plea seeking mercy, the court said that misplaced sympathy or unwarranted leniency will send a wrong signal to the public, giving room to suspect the institutional integrity and would affect its credibility.

“Inadequate sentence would do more harm to the justice system and would undermine the public confidence in the efficacy of the law as society could not long endure such assaults on the justice system,” it said.

According to the charge sheet, the documents tampered with included a police memo giving details of recoveries immediately after the incident, Delhi Fire Service records pertaining to repair of transformer installed inside Uphaar, minutes of managing director's meetings, and four cheques.

Out of the six sets of documents, a cheque of Rs 50 lakh, issued by Sushil Ansal to self, and minutes of the MD's meetings, proved beyond doubt that the two brothers were handling the day-to-day affairs of the theatre at the relevant time, the chargesheet had said.

It also said the Ansals had taken the defence in the main case that they had no involvement in the day-to-day functioning.

The tampering was detected for the first time on July 20, 2002, and a departmental inquiry was initiated against Dinesh Chand Sharma. He was suspended and terminated from services on June 25, 2004.