‘Sigh of relief’: Overwhelming emotion in Ayodhya after SC’s verdict

In the run-up to the judgement delivered by a five-judge bench, many lanes in the town bore a deserted look. 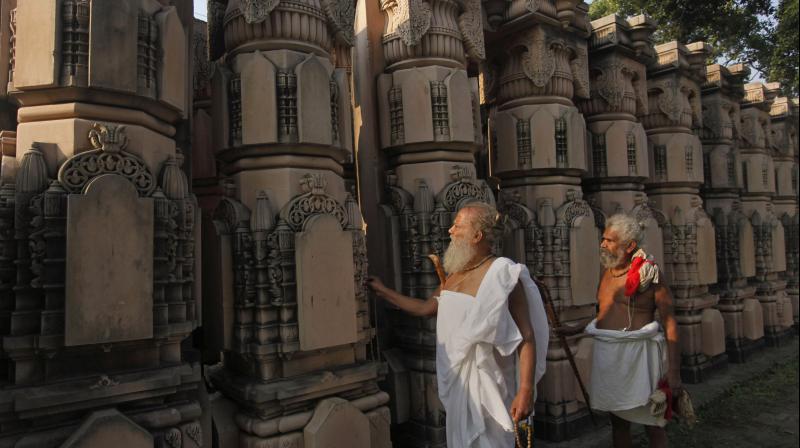 Devotees who visited the makeshift Ram Lalla temple at the disputed site appeared overwhelmed when told about the judgment. (Photo: AP)

Ayodhya: Relief appeared to be the overwhelming emotion in Ayodhya as the Supreme Court pronounced its judgment on the disputed site, allotting it for the construction of a Ram temple. Many lanes and by lanes were barricaded by the police, but elsewhere it was business as usual.

In the run-up to the judgement delivered by a five-judge bench, many lanes in the town bore a deserted look. At homes, people sat glued to their television sets.

"Thank God," said Preeti Singh, a resident of Rikabganj, who was visiting a Durga temple with her children around the time the five-judge bench delivered the judgment in the Ram Janmabhoomi-Babri Masjid land dispute. At some places, people chanted “Jai Shri Ram” and burst crackers. Mohammed Sajid, who runs a tailoring shop, told PTI that he felt the verdict is “incomplete”. He did not wish to elaborate.

Devotees who visited the makeshift Ram Lalla temple at the disputed site appeared overwhelmed when told about the judgment. Bharat Singh was among them. He had his “darshan” around 11 am, about 30 minutes after Chief Justice Ranjan Gogoi had begun reading the verdict.

“I am overwhelmed and feel that my dream has come true. I feel blessed,” he said later, holding back tears. Mumbai resident Shreenarayan Shukla and Moradabad business Manish Gupta emerged smiling, their foreheads smeared with sandalwood paste. In Hanumangari area, some youngsters chanted “Jai Shri Ram”, with their parents initially telling them not to do so.

Ramesh Das, 40, said, “Five hundred years of slavery have finally ended. I never expected this.” Soon, he was distributing sweets to passersby. Calling himself a “Ram bhakt”, a man dressed a Lord Hanuman hugged him. Mahant Sanjay Das of Hanumangarhi temple was seen exploding crackers.

Mahant Raju Das, a priest at the temple, said, "I welcome the SC judgement. This is a very good judgment, and I would l like to congratulate the Supreme Court and the Chief Justice." Around Naya Ghat, it was business as usual at shops selling puja material, and worshippers visited temples that dot the area. Some foreign tourists were also seen there.

At eateries there, people discussed the judgment and a handful of youngsters shouted Jai Shri Ram slogans. Vehicles from outside Ayodhya, including those carrying media people, were being stopped a couple of kilometres ahead of the sensitive Hanumangarhi temple area. Ahead of the verdict, there was apprehension among Ayodhya resident.

"We want amity. I want to open my shop and earn my livelihood. I hope there will be no problem anywhere after the verdict," Ramu, a tea-seller in Hazratganj area, said. After the verdict, vegetable seller Akram said he will go about his business. “There is no tension anywhere. Whatever decision has come is welcome," he said. All schools and colleges in Uttar Pradesh have been closed from Saturday to Monday as a precautionary measure. Schools will also be closed on Tuesday for Guru Nanak Jayanti.