According to the pact, Pakistan will allow 5,000 Indian pilgrims daily to visit Gurdwara Kartarpur Sahib. 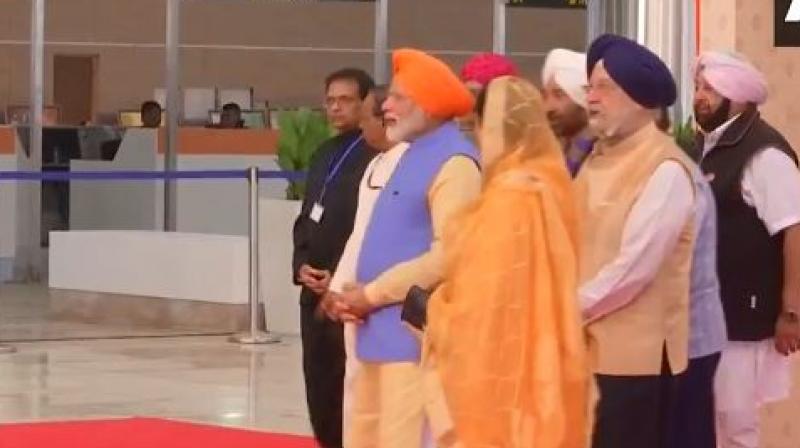 New Delhi: The first batch of the Indian pilgrims entered Pakistan on Saturday through the historic Kartarpur corridor which was thrown open ahead of the 550th birth anniversary of Sikhism founder Guru Nanak Dev.

The corridor links Gurdwara Darbar Sahib in Pakistan, the final resting place of Guru Nanak Dev, to Dera Baba Nanak shrine in Punjab's Gurdaspur. Earlier, Prime Minister Narendra Modi flagged off the first batch of over 500 pilgrims, saying it will be easy to pay obeisance at the Darbar Sahib gurdwara after the opening of the Kartarpur corridor.

Congress MLA Navjot Singh Sidhu was also given political clearance to visit the Gurdwara Darbar Sahib by the foreign ministry on Thursday.

PM Modi inaugurated a passenger terminal building, also known as Integrated Check Post, where pilgrims will get clearance to travel through the newly-built corridor.

Before the inauguration ceremony, the Prime Minister offered prayers at Ber Sahib Gurudwara at Sultanpur Lodhi, a statement issued by the Prime Minister's Office said on Friday. He also addressed a public rally at Shikar Machhian. According to sources, the Prime Minister will also spend time with pilgrims and eat lunch with them at the religious kitchen of Dera Baba Nanak Gurudwara.

However, the landmark corridor is being inaugurated amidst tight security in the backdrop of tension between the two countries over the Kashmir issue.

Pakistan held a separate event on the other side of the border, with the country's Prime Minister Imran Khan declaring it open from the other end of the Kartarpur Corridor.

There have been mixed signals from Pakistan on the requirement of passports for the visiting pilgrims from India using the corridor. Pakistani authorities have also retracted the USD 20 service charge waiver for the inauguration day on Saturday.

Sources in New Delhi had earlier said that Pakistan has conveyed to India that pilgrims using the Kartarpur corridor on Saturday will also have to pay the USD 20 service fee, going back on its promise.

In another U-turn hours later, Foreign Office spokesperson Mohammad Faisal said that Pakistan will not collect any service charge from Indian pilgrims on November 9 and 12.

"PM Imran Khan had also announced waiver of service charges of USD 20 on 9 and 12 November 2019. Abiding by the PM's commitment, Pakistan will not receive any service charge from pilgrims on these two dates," he clarified on Twitter.

"We recall that as special gesture on auspicious occasion of 550th anniversary of Baba Guru Nanak, PM Imran Khan had announced waiver of requirements of passport & registration of pilgrims 10 days in advance. Unfortunately, Indian side has declined these facilitative measures," he noted.

According to the pact, Pakistan will allow 5,000 Indian pilgrims daily to visit Gurdwara Kartarpur Sahib. On August 5, India announced the revocation of Jammu and Kashmir's special status under Article 370 and the bifurcation of the state into two union territories, Jammu and Kashmir, and Ladakh. Pakistan reacted angrily to the decision and even expelled Indian High Commissioner to Islamabad.