HAM leaders claim that Mr Manjhi has a major stake in the Mushahar community, a sub-caste among Dalits in Bihar. 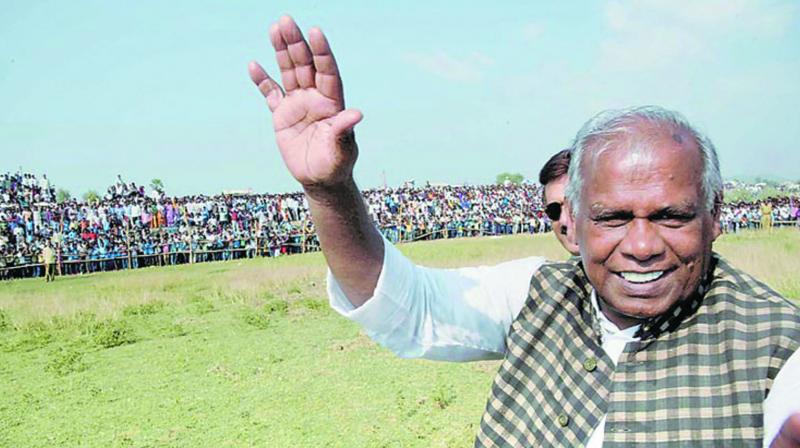 His decision has created a flutter in the state politics. Talking to this newspaper, Mr Manjhi said that the decision was taken unanimously during a meeting.  “Time has come to expand our political base and contest elections on our own,” Mr Manjhi said.

According to HAM spokesperson Amrendra Tripathi, party leaders have been asked to complete the process of setting up booth-level committees by December 31.

Given the development, political analysts feel that Mr Manjhi may return to the NDA fold. Sources said that he has discussed the issue with BJP’s senior Dalit leader Sanjay Paswan during a meeting on Thursday.

Signs of a rift in the Opposition alliance had emerged during recently-concluded byelections when HAM fielded a candidate against the RJD from Nathnagar seat.

Mr Manjhi has been upset with the RJD leadership, especially Tejashwi Yadav, for not coordinating with partners who had joined the grand alliance before the Lok Sabha elections.

“As a partner in the grand-alliance, we had requested for the formation of a coordination committee but nothing was done. They (RJD) take decisions without consulting other partners. I don’t know what Tejashwi and others would say about it, but I strongly feel that there is a confusion in the grand-alliance and we took the decision to save our party’s existence,” HAM chief said.

Mr Manjhi, considered a strong Mahadalit leader in Bihar, is the only MLA from his party. According to sources, his entry into the grand-alliance was scripted by Tejashwi who has been trying to expand his political base and also strengthen the RJD in Bihar.

HAM leaders claim that Mr Manjhi has a major stake in the Mushahar community, a sub-caste among Dalits in Bihar. The community has a population of around 40 Lakh and was classified among Mahadalits in 2007 by chief minister Nitish Kumar.

Sources said that the HAM, besides Bihar, is also eyeing 9 scheduled caste (SC) seats in Jharkhand. HAM leaders said that the selection of candidates will be finalized by the party’s top leadership by the end of this week.

“The party may contest around 20 out of 81 seats in Jharkhand. The final decision regarding the issue is likely to be announced by our party chief Jitan Ram Manjhi on November 10”. HAM Spokesperson Danish Rizwan said.