The common tone of reactions remained where leaders said it was 'neither a victory, nor loss.' 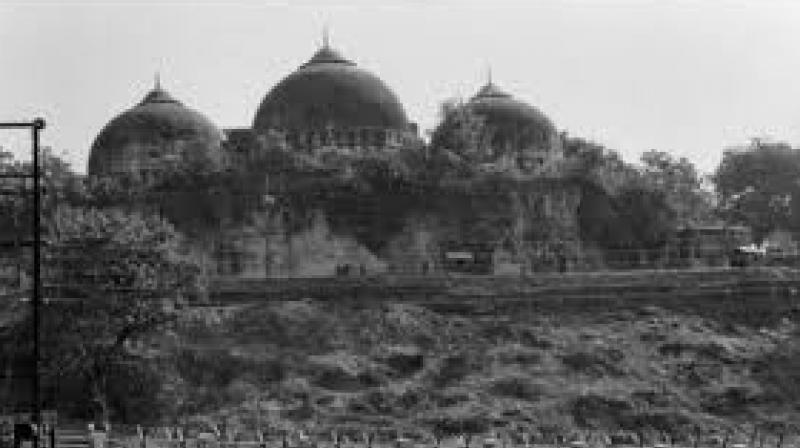 PM Modi hailed the decision, 'The halls of justice have amicably concluded a matter going on for decades. Every side, every point of view was given adequate time and opportunity to express differing points of view. This verdict will further increase people’s faith in judicial processes,' he said. (Photo: PTI | Representational)

New Delhi: The Supreme Court in a unanimous verdict on Saturday cleared the way for the construction of a Ram Temple at the disputed site at Ayodhya, and directed the Centre to allot a 5-acre plot to the Sunni Waqf Board for building a mosque.

In one of the most important and most anticipated judgements in India's history, a 5-judge Constitution bench headed by Chief Justice Ranjan Gogoi put an end to the more than a century-old dispute that has torn the social fabric of the nation.

PM Modi hailed the decision, "The halls of justice have amicably concluded a matter going on for decades. Every side, every point of view was given adequate time and opportunity to express differing points of view. This verdict will further increase people’s faith in judicial processes,'' he said.

Defence Minister Rajnath Singh, too, lauded the decision. He said, "It is a historic and landmark judgement."

''India is the winner'' from the Supreme Court judgment on the Ayodhya land dispute, Vice President M Venkaiah Naidu said asserting that people's desire and ability to live together has triumphed.

BSP chief Mayawati, too, termed the verdict as historic. She said, "Under the secular constitution of Respected Baba Saheb Dr Bhimrao Ambedkar, while respecting the historic decision given by the SC in relation to Ram Janmabhoomi-Babri Masjid land dispute today, all the work should be done in an amicable atmosphere only."

Former PM, HD Deve Gowda welcomed the verdict saying, ''The decision is a balanced decision which I welcome.''

Key Hindu leaders associated with the Ram Janmabhoomi movement lauded the contributions of late VHP stalwart Ashok Singhal and veteran BJP leader L K Advani for the success of the cause.

Senior BJP leader Murli Manohar Joshi, one of the key leaders to spearhead the movement, called the Supreme Court's judgement in the case 'historic' and said it should be accepted with an 'open mind' by all communities.

"Lakhs of workers made sacrifices. For the leadership of the movement, I will give highest credit to Ashok Singhal and L K Advani."

BJP Vice President, Uma Bharati welcomed the 'divine' verdict. She hailed Singhal and Advani who played the most significant part of the movement.

Taking to Twitter, she wrote, ''Recalling the honourable Ashok Singhal ji, paying homage to him. All those who sacrificed their lives for this work, tribute and... Greetings of Advani ji, under whose leadership all of us put our best at stake for this great work.”

Uttar Pradesh CM Yogi Adityanath also welcomed the verdict and urged that everyone support for unity and amity in the country.

Former CM of Maharashtra Devendra Fadnavis said, "The decision cannot be considered as for or against anyone. Almost everyone has welcomed this verdict."

Delhi CM and AAP leader, Arvind Kejriwal also welcomed the verdict. He said, "We welcome the decision of the SC. Today SC gave the decision on several decades of controversy. The years-old dispute ended today. I appeal to all people to maintain peace and harmony."

"The Supreme Court has pronounced its verdict on the Ayodhya issue. While honouring this decision of the court, we all should maintain mutual harmony. This is a time for brotherhood, trust and love among us all Indians," Congress leader Rahul Gandhi said in a tweet in Hindi.

"Respecting the decision, all sides, communities and citizens should maintain our centuries-old tradition of unity. Together, we all will have to strengthen mutual harmony and brotherhood," Priyanka Gandhi said in a tweet.

However, targetting the BJP, Rajasthan CM Ashok Gehlot said the saffron party made Ram Temple a political issue and tried to 'divide society for winning elections.'

''BJP, RSS, VHP should have left the matter to the judiciary at that time. If they had done it, the country could have been saved from violence and bloodshed. They provoked people. Donation for Ram temple was collected. Babri Masjid was demolished and when the riots broke out, who had benefited?" he asked.

Karnataka Chief Minister B S Yediyurappa on Saturday urged people of the state to 'wholeheartedly welcome' the Supreme court verdict in the sensitive Ayodhya land dispute case, and not to react 'emotionally.'

Karnataka CM B S Yediyurappa urged the people to 'wholeheartedly welcome' SC verdict in Ayodhya case and not to react 'emotionally.'

He said the judgement is neither a victory nor a defeat for anyone.

"The Judgment of Hon'ble Supreme Court on Ayodhya is historic. The Judgement will further strengthen India's social fabric. I urge everyone to take the verdict with equanimity and magnanimity. I also appeal to the people to maintain peace & harmony after this landmark verdict," he tweeted.

RSS Chief, Mohan Bhagwat said, "We welcome this decision of Supreme Court. This case was going on for decades and it has reached the right conclusion." He further said, "This should not be seen as a win or loss. We also welcome everyone's efforts to maintain peace and harmony in society.''

Spiritual leader, Sri Sri Ravishankar said, ''This is a historic judgement, I welcome it. This case was going on for a long time and finally it has reached a conclusion. Peace and harmony should be maintained in society.''

Former Madhya Pradesh chief minister Shivraj Singh Chouhan on Saturday urged everyone to respect the Supreme Court verdict in Ayodhya case and said that the peace and harmony should be maintained.

"We all should respect and welcome the Supreme Court verdict. This is not a loss for anyone. This country belongs to all of us. Peace, harmony, unity, and love should be maintained. Our country moves ahead...we all should work for it," he said.

MNS chief Raj Thackeray said, "I am happy today. All 'karsevaks' who gave sacrifices during the entire struggle..their sacrifice has not gone waste. Ram Temple must be constructed at the earliest. Along with Ram Temple, there should also be 'Ram Rajya' in the nation, that is my wish."

Shiv Sena chief Uddhav Thackeray has said that he will be going to Ayodhya on November 24. Hailing the verdict he said, ''This day will be written in golden letters in the history of India as the dispute over Ram Mandir has finally come to an end. I bow down to the Supreme Court for this historic verdict. Everyone has accepted the verdict. I will be going to Ayodhya on 24 November.''

Nirmohi Akhara spokesperson, Kartik Chopra, was grateful to the SC despite it pronounced against their claim -- that it is a shebait or devotee of the deity Ram Lalla. He said that top Court recognised its fight for the past 150 years.

However, the Sunni Waqf board's lawyer Zafaryab Jilani expressed disappointment over the issue. ''The Ayodhya verdict has a lot of contradictions. We will seek a review as we are not satisfied with the verdict."

''It is not just to give an inner courtyard to another party,'' he argued while appealing for peace and no protest.

Kamaal Faruqi of All India Muslim Personal Law Board (AIMPLB) also expressed disappointment on the verdict.