Top security officials said it had been decided to provide the Gandhi family with CRPF commandos along with pilot and escort vehicles. 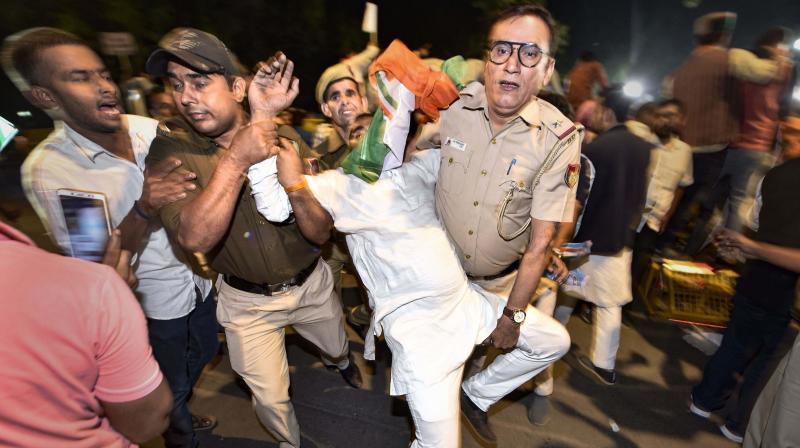 New Delhi: In a move that is set to snowball into a major political controversy, the Special Protection Group security cover of Congress president Sonia Gandhi and her two children, Rahul and Priyanka, has been withdrawn by the Centre, replacing it with “Z-plus” security, to be provided by the CRPF. Sources said the SPG cover for the Gandhi family was withdrawn after a detailed review meeting on their threat perception carried out by multiple intelligence and security agencies.

While the move triggered protests by Congress workers outside the residence of home minister Amit Shah, senior party leader Ahmed Patel said the BJP had “descended to the ultimate personal vendetta mechanism”.

In a tweet, Mr Patel said: “The BJP has descended to the ultimate personal vendetta mechanism, compromising the lives of family members of 2 former Prime Ministers to acts of terror and violence.”

This now means the SPG will now protect only Prime Minister Narendra Modi, as the SPG security cover of former PM Manmohan Singh had also been withdrawn a few months ago.

Mrs Gandhi and her two children were provided the SPG cover after the assassination of former PM Rajiv Gandhi in May 1991. The SPG Act was amended for this to cover former PMs and their families. Thus, after a long spell of 28 years, the Gandhis will no longer be SPG protectees, but their Z-plus security cover will remain.

Top security officials said it had been decided to provide the Gandhi family with CRPF commandos along with pilot and escort vehicles. If required, sources added, their convoys would also be provided with jammer vehicles depending on the threat perception and security review, which is done on a regular basis. Apart from providing close proximity security to the Gandhis, the CRPF commandos will also be deployed at their residence.

The SPG, a highly specialised security unit, was raised through an Act of Parliament after the assassination of former PM Indira Gandhi in 1984. Initially, the SPG was meant only for the PM and his family but the SPG Act was later amended in 1991 following Rajiv Gandhi’s assassination to cover former PMs and their families as well.

Security sources claimed Mrs Gandhi along with Rahul and Priyanka Gandhi Vadra did not use bullet-resistant vehicles on several occasions in the last many years, and did not even take SPG commandos on several foreign trips.  Rahul Gandhi, the sources added, had between 2005 and 2014 travelled in non-BR vehicles on 18 visits to different parts of the country, while from 2015 till May 2019 he had travelled in a non-BR vehicle in Delhi.

On one such visit to Banaskantha in Gujarat on August 4, 2017, there was incident of stone-pelting in which an SPG PSO was injured. This, officials said, could have been averted had Rahul Gandhi used the bullet-resistant vehicle. Out of the total 156 foreign visits that Rahul Gandhi undertook since 1991, he did not take SPG officers on 143 visits.

In the case of Sonia Gandhi, the officials added, she did not use SPG bullet-resistant vehicles on 50 occasions while travelling in Delhi from 2015 to May 2019. She also undertook 13 unscheduled visits to various places in the country in the past five years. The Congress chief also didn’t take SPG officers on 24 foreign visits since 2015.

Even Priyanka Gandhi Vadra in last five years did not use SPG bullet-resistant vehicles on 339 occasions in Delhi and 64 occasions at other places in the country. This despite being advised by the SPG to use their vehicles. Out of the total 99 foreign visits that Priyanka Gandhi Vadra has undertaken since 1991, she took SPG security cover only on 21 occasions and refused to take security for 78 other visits. Sources said that since May 2014, Priyanka Vadra had several times levelled serious allegations against SPG officers, alleging that they were collecting her personal and confidential information and sharing with unauthorised persons. Priyanka Vadra had even threatened top SPG officials with legal action. But the security agency had clarified several times in the past that its work was limited only to its official charter.