Ayodhya dispute, a timeline: A historical, political and socio-religious perspective

With this verdict, one of the longest-standing issues in the history of medieval-modern India will be resolved. 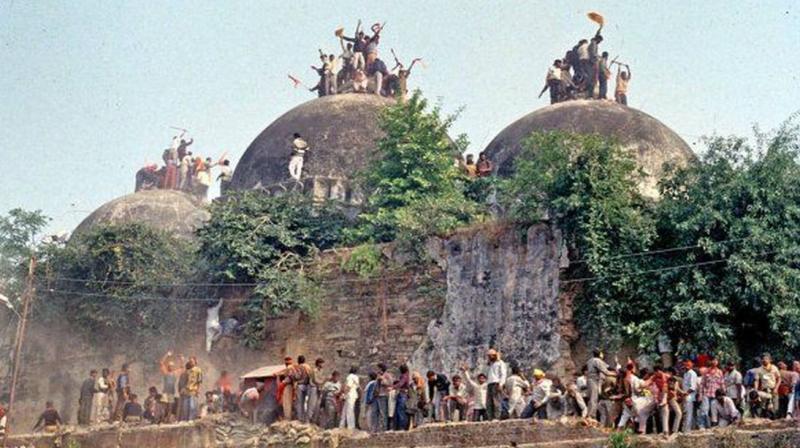 Let’s take a look at the various important dates over centuries leading up to the Supreme Court verdict in the Ayodhya dispute on November 9.(Photo: PTI)

Mumbai: The Ram Janmabhoomi-Babri Masjid dispute is a centuries-old tussle between Hindus and Muslims with the former claiming that the disputed land is actually the birthplace of Lord Rama where a mosque was built in 1528–29 CE (935 AH) by Mughal Emperor Babur's Commander Mir Baqi.

Since the mosque was built on orders of the Mughal Emperor Babur, it was named Babri Masjid.

The Babri mosque was demolished by Hindu kar sevaks on December 6, 1992, in Ayodhya. The country witnessed massive riots following the Ayodhya incident that killed over 2,000 people.

With this verdict, one of the longest-standing issues in the history of medieval-modern India will be resolved.

Let’s take a look at the various important dates over centuries leading up to the Supreme Court verdict in the Ayodhya dispute on November 9.

Here is the timeline of the Ayodhya dispute:

1524: Mughal emperor Babur entered India on the invitation of Daulat Khan Lodi and became the first Mughal ruler of India.

1528: The date of the construction of the Babri Masjid is uncertain. The inscriptions on the Babri Masjid premises, however, stat that the mosque was built in 935 AH (1528-29) by Mughal commander Mir Baqi.

1853: Under the rule of Nawab Wajid Ali Shah of Awadh, the first incident of communal violence over the Ayodhya issue was recorded. This was the first time that the Hindu community representatives claimed that the mosque was built after the demolition of a Hindu temple.

1859: By this time, Hindus and Muslims both started praying at the site. The issue of possession of the site led to more communal violence. The Britishers built a fence that divided the compound into two --- the inner court used by Muslims and the outer by Hindus.

1885: The judiciary was involved for the first time as Mahant Raghubir Das filed a plea in Faizabad district court seeking permission to build a canopy of Ram Chabootra on the site of Ram Janmnabhoomi. The court, however, rejected his plea.

1949: The first major controversy in the Ayodhya conflict came when an idol of Lord Ram was allegedly placed inside the temple by a Hindu activist and a message was spread that Lord Ram had miraculously appeared inside the mosque. There was a protest from the Muslim side.

Both the Hindus and the Muslims filed a civil suit against each other.

The then government declared the premises as 'disputed area' and locked the gates until further notice.

The then Prime Minister Jawaharlal Nehru asked the idol to be removed immediately but the local officer KK Nair refused to carry out the order.

1950: A suit was filed in the court by the Hindus seeking permission for the right to worship the idol in the premises. The court held back the removal of the idol and allowed Hindus to worship.

1959: Nirmohi Akhara came into the fray and stake claim to the site. It filed suit claiming to be the custodians of the spot at which Lord Ram was 'born'.

1961: Sunni Waqf Board moved to court against the 'forceful' idol installation and sought possession of the Mosque.

1986: The district court directed to open the gates for 'darshan' to Hindus. The Muslims protested against this decision and set up the Babri Masjid Action Committee. As a result, the gates which were opened had to be closed in under an hour.

1989: Vishwa Hindu Parishad's (VHP) then-Vice President Deoki Nandan Agarwal filed a suit for the title and possession at the Lucknow bench of the Allahabad High Court.

The same year, the Babri Masjid-Ram Janmabhoomi dispute came under the scanner of a Special Bench of the Allahabad High Court.

1990: VHP activists partially damaged the Mosque while attempting to demolish it.

1992: December 6, the Babri Masjid dome was demolished. Nationwide communal riots broke out and more than 2,000 lives were lost.

Ten days later, on December 16, the Liberhan Commission was set up to investigate the demolition of the disputed structure of Babri Masjid. Retired High Court Judge MS Liberhan was in charge of the commission. BJP government in four states were dismissed by the then Prime Minister Narasimha Rao.

1993:  ‘Acquisition of Certain Area at Ayodhya Act’ was passed for the acquisition of land by Centre in the disputed area. Various writ petitions, including one by Ismail Faruqui, filed at Allahabad HC challenging various aspects of the Act.

1994: The Supreme Court said in the historic Ismail Faruqui case that a mosque was not integral to Islam.

1996: Allahabad High Court had put all civil suits on a single table.

2002: Allahabad High Court ordered Archaeological Survey of India (ASI) to find out if there was evidence of a Hindu temple beneath the Mosque structure. The same year, the court also started hearing in the case to find out the real owner of the disputed site.

2003: ASI found evidence of temple beneath the site of Babri Masjid and informed the court about the same. ASI found the evidence-based on stone columns and pillars that could be representations of Hindu, Buddhist or Jaina elements. All India Muslim Personal Law Board said it would challenge the ASI report in court.

2009: Librahan Commission submitted its report. Kalyan Singh, the Chief Minister of Uttar Pradesh at the time of Babri Masjid demolition was harshly criticised in the report. He was accused of posting bureaucrats and police officers who would stay silent during the mosque's demolition in Ayodhya.

2010: Lucknow Bench of Allahabad High Court reserved its order, suggests parties to resolve issues through talks but no one is interested.

2010: Allahabad High Court gave a historic judgement in the Ayodhya case. The court divided the land into three parts -- first went to Ram Lalla, the second part to the Islamic Waqf Board and third to the Nirmohi Akhara. Neither party was quite pleased with the decision, therefore, Hindu Mahasabha and Sunni Waqf Board both challenged the Allahabad High Court decision in the Supreme Court.

2015: VHP declared people all across India to collect stones for the construction of Ram Mandir at the disputed land. The then UP Chief Minister Akhilesh Yadav said he would not allow the stones to come to Ayodhya because it risked causing communal tension.

2017: The Supreme Court stated that the Babri Masjid demolition case was sensitive and required unification of issues. It appealed to all stakeholders of the issue to find an amicable solution. It constituted a three-judge bench to hear pleas challenging the 2010 verdict of the Allahabad HC. It also directed the Justice of the Allahabad HC to nominate two additional district judges within ten days as observers to deal with the upkeep of the disputed site. The final hearings in the Ayodhya appeals began before a Bench of Chief Justice of India (now retired) Dipak Misra, Justices Ashok Bhushan and S. Abdul Nazeer.

2018: Supreme Court said the 'Ayodhya land dispute' case will be listed before an 'appropriate bench' in January 2019.

2019: Supreme Court had set up a five-judge Constitution Bench to hear the land dispute. The bench heard both sides of the argument. It also tried to resolve the issue through 3rd party mediation but all attempts to do so fail. People like Baba Ramdev and Sri Sri Ravi Shankar tried to mediate the issue as well.

*January 4: A Two-judge CJI Bench again said an "appropriate bench" will take up the appeals on January 10.

*January 8: SC notified that a five-judge bench led by the CJI and the next four future Chief Justices of India in line of seniority - Justices S.A. Bobde, N.V. Ramana, U.U. Lalit and D.Y. Chandrachud - will hear the Ayodhya title dispute appeals on January 10.

*January 10: The hearing remained a non-starter as Justice U.U. Lalit recused himself from the Bench.

*February 20: A Supreme Court circular informed that the Ayodhya Bench would assemble on February 26.

*February 26: The Supreme Court proposed a court-monitored mediation process between the Hindu and Muslim parties litigating the Ayodhya dispute. Gave eight weeks for the Muslim appellants to examine the official translation of Ayodhya case records.

*August 2: Efforts to mediate a final settlement between rival Hindu and Muslim parties in the Ayodhya title dispute cases had failed, a Constitution Bench led by Chief Justice of India Ranjan Gogoi said court to hear appeals from August 6 on a day-to-day basis.

*August 6: Constitution Bench began hearing the cross-appeals filed by the Hindu and Muslim sides challenging the three-way partition of the disputed 2.77 acres of Ramjanmabhoomi-Babri Masjid land among Ram Lalla, Nirmohi Akhara and the Sunni Waqf Board; Nirmohi Akhara lays claim to Ram Janmabhoomi

*August 9: Senior advocate Rajeev Dhavan, appearing for a Muslim party, said he will “not be able to assist” the court if the hearing is “rushed through”.

*August 22: Hindus have an “unfettered” right to worship at a site believed for centuries to be the birthplace of Lord Ram, appellant Gopal Singh Visharad told the court.

*August 27: Nirmohi Akhara dropped objection to a separate suit for title filed by the Ayodhya deity.

*August 30: Emperor Babur was an invader and law could not be used to “institutionalise” the rights of an invader, the Hindu Mahasabha argued.

*September 3: Installation of idols inside Babri Masjid in the intervening night of December 22-23 of 1949, which marked the beginning of heightened tensions and legal battle, was a “surreptitious attack”, senior advocate Rajeev Dhavan claimed.

*September 19: The Uttar Pradesh Sunni Central Waqf Board denied reports that it was diluting its stand in the Babri Masjid-Ram Janmabhoomi case.

*September 23: The Bench said the faith of Hindus in the Ram Janmabhoomi had been a constant and it would be hard to rebut their belief, while questioning senior advocate Rajeev Dhavan, appearing for the Muslim parties, on whether the divinity and the “exact form” of an idol of a deity were necessary to hold that they had a “juristic personality”.

*September 24: The Muslim side in the title dispute case said Lord Ram was born in Ayodhya and accepted that Ram Chabutra (a platform) is his exact birth spot.

*September 25: The Muslim parties argued that the 2003 Archaeological Study of India (ASI) report on the excavations at the Babri Masjid site, which reported traces of a large structure pre-existing the Babri Masjid, was filled with “palpable and inherent” infirmities and inconsistencies. The Bench, however, said the ASI report can't be contested now and should have been objected to in the Allahabad High Court, which had commissioned the excavations.