An arrest that bled India but gave BJP political heft

The apex court verdict for the construction of Ram temple in Ayodhya, came just a day after he celebrated his 92nd birthday. 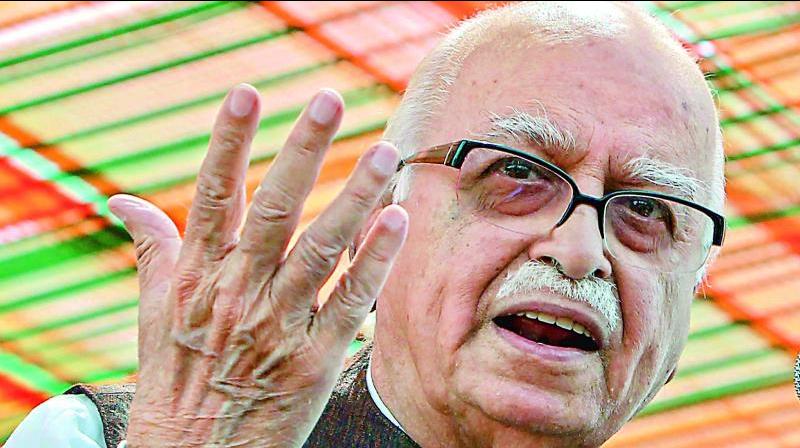 Samastipur: The Supreme Court's verdict marking the denouement of the vexatious Ayodhya dispute might have riled or relieved the warring parties, but L K Advani, the hawk-turned-dove BJP patriarch, must be a happy man.

The apex court verdict, which has paved the way for the construction of a Ram temple in Ayodhya, came just a day after he celebrated his 92nd birthday.

Nearly three decades ago, on October 23, 1990, his 'chariot', a swanky air-conditioned monster of a vehicle, was stopped on track by the orders of an ebullient Bihar Chief Minister Lalu Prasad at little-known town of Samastipur, setting off a string of events that would shape the country's politics in years to come.

Advani's attempt to galvanise Hindus through his 'Ram Rath Yatra', and Lalu's act of having him arrested, was a watershed moment in the country's history that gave birth to the 'Mandal-Mandir' politics which left society cleaved on both religious and casteist lines.

The arrest of Advani, then the BJP president, was as dramatic as its effects were cataclysmic.

"It was early in the morning when my telephone rang. I was surprised to find the chief minister on the other side. He was his usual chatty self. He asked me kitna sote hain (how long do you sleep). Knowing that Prasad himself was a late riser, I enquired what made him rise so early," reminisced S D Narayan, a veteran journalist who then headed the Patna bureau of PTI.

"Baba ko pakad liya (we have caught the old man) was his terse response. Governments across the country and in many states were feeling the heat of Ram Rath Yatra and were itching to do something to bring it to a halt. Finally, the flamboyant chief minister of Bihar chose to bite the bullet," said Narayan.

A veteran Samastipur-based journalist, who was then a cub reporter working for a Hindi daily, recalled how the air was thick with anticipation that day.

"I was told to follow the rath yatra from Hajipur to Samastipur. In Hajipur, Advani had received a rousing welcome but, oddly, helicopters were hovering in the sky. We had a vague impression that something big was going to happen," he said.

The news of Advani's arrest was broken to journalists by R K Singh, the redoubtable district magistrate of Samastipur.

All telephone lines had gone dead before Advani's arrest and an official briefing was the only way to gather news in those days when internet and mobile phones were not known and fax machines were a rarity.

Singh later went on to become the Union home secretary and is now a Union minister from the BJP quota.

Advani was flown in an aircraft to a government guest house in Dumka, now in Jharkhand, before being released a few days later.

Though Advani's arrest brought an abrupt end to his hugely successful rath yatra, it triggered massive protests and communal riots across several towns and cities, especially in north India.

The communal frenzy that the arrest left in its wake saw thousands of radical Hindu 'Karsevaks' (volunteers) converge in Ayodhya.

On October 30 that year, 28 Karsevaks were killed in police action while trying to storm the Babri Masjid, which was finally felled on December 6, 1992 in the presence of Advani and a host of top BJP and VHP leaders.

Advani is an accused in the case. Years later, Samajwadi Party founder Mulayam Singh Yadav, who was then the chief minister of Uttar Pradesh, defended the action, saying if even more people were required to be killed for the country's unity and integrity, the security forces would have done that.

Advani's arrest prompted the BJP to withdraw its support to the V P Singh government at the Centre, which declared it will go ahead with the implementation of the Mandal Commission report that would provide 27 per cent reservation to backward classes in government jobs and state-run educational institutions.

The events that unfolded after Advani's arrest not only benefited the BJP, whose political clout grew exponentially, but also catapulted Lalu to the forefront of the anti-saffron camp. In the absence of a towering Muslim leader, Lalu, once derided as a country bumpkin, emerged as not only a messiah of the backward classes but also a doughty fighter for the cause of the minority community.

The two protagonists of the Samastipur saga, in the autumn of their lives, are now away from limelight, having left conflicting legacies.

While Advani has been relegated to the virtually non- existent  'Margdarshak Mandal' of the BJP, which now enjoys hegemony over the country's political landscape, an ailing Lalu Prasad cools his heels in a Jharkhand prison presiding over a party left feeble by his absence from public space.