India   All India  09 Nov 2019  27 years on, after the Ayodhya verdict, another related case may get judgement
India, All India

27 years on, after the Ayodhya verdict, another related case may get judgement

The second case pertains to the demolition of Babri Masjid on December 6, 1992. 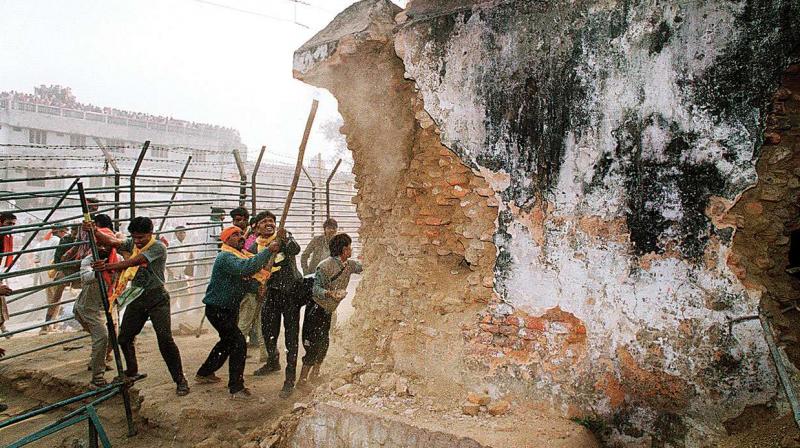 The matter has reached the final stages in a special CBI court, after 27 years of investigations and trial. Out of the 49 people accused in the case, some have died and those still active also include people from Indian politics. (Photo: File | AFP)

New Delhi: After the Supreme Court (SC) passes Ayodhya verdict today, which is one of India's most sensitive and significant cases -- another related case in the title dispute might see face of judgement from a Lucknow court soon after.

The second case pertains to the demolition of Babri Masjid on December 6, 1992, and the alleged criminal conspiracy behind it, News18 reported.

The matter has reached the final stages in a special CBI court, after 27 years of investigations and trial.

Out of the 49 people accused in the case, some have died and those still active also include people from Indian politics.

A second FIR was filed 10 minutes later, (FIR no. 198/92 was registered under sections 153 A, 153 B, 505 of IPC against LK Advani, Ashok Singhal, Giriraj Kishore, Murli Manohar Joshi, Uma Bharti, Vinay Katiyar, Vishnu Hari Dalmiya and Sadhvi Ritambahra. This was the hate and provocative speech case.

Forty seven other FIRs were also registered in the days to come related to offfences of assault on media persons, looting valuables like cameras and reporting gadgets from them, etc. All FIRs were filed at Thana Ramjanmaboomi in Ayodhya.

The-then UP government decided to move all the 49 cases for CBI probe.

A single, consolidated chargesheet was filed by the CBI against 40 people in 49 cases in a special court of Lucknow.

The agency filed a supplementary chargesheet against nine other prominent people making the tally of accused 49.

The chargesheet of the CBI argued that the demolition of the mosque was the result of a larger criminal conspiracy. New names were added in the list of the accused. The names included some of the bigwigs from RSS and BJP. A charge under section 120 (b) of criminal conspiracy was added.

After the chargesheet was filed, a trial was supposed to take place. However, the case got entangled in legal complexeties.

The special judge after hearing the petitioner and the defence counsel filed a case under section 120 (b) -- criminal conspiracy prima facie. The court said that formal changes would be made in the next eharing. Some of the accused move the Lucknow bench of the Allahabad high court against the lower court’s decision to frame charges.. The matter kept lingering on.

Justice Jagdish Bhalla of the Lucknow bench of the Allahabad high court passed a detailed order.  No illegality was found in a joint single chargesheet for all the FIRs, since offences were allegedly committed in same course of action for accomplishing a conspiracy.

Taking cognizance of administrative lapse UP government's side, the high court upheld framing of charges against the 48 accused barring Advani, Joshi, Uma Bharti, Vinay Katiyar and others.

The Lucknow court dropped proceedings against not just the original eight accused, but also against 13 others against the backdrop of HC order.

There has been a speedy hearing from 2017 onwards. Charges were framed and trial on the joint chargesheet began. The trial against Kalyan Singh was stopped as he became the governor of Rajasthan and held a constitutional office.

However, after he recently demitted office, a case against him was started again.  A few months back on the directives of the Supreme Court, the special judge, Surendra Kumar Yadav, had also been given an extension till the time of completion of the hearing in the case.

Over the course of 27 years, several accused including political bigwigs like Bal Thackeray, Ashok Singhal, Giriraj Kishore, and others have died.

Out of the 300 witnesses that were questioned throughout the course of the hearing, 50 have passed away.

Senior advocate IB Singh, who had fought in defence of the several accused has said that the trial is in the final phase. He also pointed out several flaws right from the time the FIRs were filed in 1992.

''A few more witnesses are to be examined, mostly against Kalyan Singh. We expect completion of trial in the case in the days to come,” Singh said.