Marina Abramovic is of course famous for her phenomenally long performance-show of 700 hours, at MOMA, New York, in 2010! 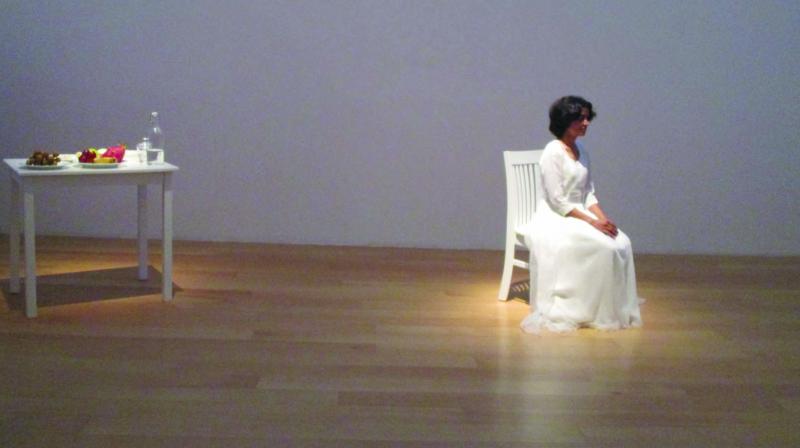 Vandana in her performance at the Bangkok Arts and Culture Centre

“This is my highest platform so far, the culmination of 18 years of artistic struggle” — Vandana

The Bangkok Art Biennale (BAB) is in full flow in the city, with 75 artistes from 35 countries displaying more than 200 artworks, at 20 diverse locations. The biggest name at BAB is the world- famous performance artist Marina Abramovic. Her institute MAI (Marina Abramovic Institute) which does workshops in different parts of the world, are in Southeast Asia for the first time at BAB, Bangkok.

They selected eight performing artistes from more than 100 applicants around the world to participate at BAB. This includes an Indian artiste Vandana, who lives in Gurgaon.

The eight artists were put through a gruelling workshop in Bangkok, to train them on the “Abramovic Method”, which involved high concentration levels, sharp focus, deep breath control, body and mind control, repetitive gestures, intense gazing, long hours of stationary movements. They are called “long duration” performances, and at BAB, Bangkok, they last as much as eight hours a day, for more than three weeks, which end on November 11th. Marina Abramovic is of course famous for her phenomenally long performance-show of 700 hours, at MOMA, New York, in 2010!

It was interesting to talk to the petite, but strong and articulate Indian artiste Vandana. For starters, the young girl said that she has dropped her surname, as an artistic gesture against any discrimination based on caste and social background. Vandana resides in Gurgaon (“Gurugram”, as she says) but originally comes from the small town of Bhiwani. Her restlessness and thirst for knowledge led her to Mumbai where she did a diploma in Fine Arts. She opted to learn three languages too — Hindi, Sanskrit and English. After all, she barely spoke any English at Bhiwani. During this course, she did mix media works, photography, sculptures, and her first “performances”. It was during this course that she met a Swiss director who invited her for a Residency in Switzerland, where she found herself becoming more and more inclined to the magic of “performance art”.

“I realized that this is what I wanted to do, because this is an art form that comes from within you!”, she declares, adding “there’s no script or rehearsal, and the “performance” comes spontaneously from my heart! When I did my first performance video, I had never seen it before and had no clue what it was!” she declared.

“Plato said that art is twice removed from the reality. Performance art is only once removed from the reality, I believe!” she stated. Vandana did a performance video called “Dead Bodies of the Youth” about child-marriages (which she had often witnessed in Bhiwani), where she was dressed as a bride, chopped 1,000 red roses with a knife, and presented the video with her first “live performance”, having a procession of a funeral pyre made with the chopped roses (“the dead bodies”).

Vandana wanted to do a master’s degree in Fine Arts at Mumbai, but did not get admission into the JJ School of Arts because she didn’t have a formal BFA degree. So, guess where she went? London! She admitted that London was a cultural shock and a total learning experience for the small-town girl from Bhiwani. But it also exposed her to many forms of arts and shows, including an artist talk on Marina Abramovic, which made her learn about the great performance artist, and later, she even did an entire module on her works.

However, her first encounter with Marina Abramovic’s works was in an art fair in India, about eight years ago. “I had not heard of her, did not understand anything, but I was transported to a spiritual level!” she exclaimed. She created two series of performance videos on “Silence” and “Rituals of self”, and exhibited them in Europe, along with live performances.

Vandana returned to India in January 2018, and admitted that it was another cultural shock for her, as no one seemed to know about the art-medium that totally interested her. “My family, despite not being able to understand what I wanted to do, did not stop me”, she said. When her family moved to Gurgaon, she did so too. In fact, she had just taken up a teaching job when she heard about the BAB event in Bangkok, through an Instagram post. “There was an Open Call for Applications from the MAI Institute, and we had to submit our proposals to them, on the theme of “Beyond Bliss” (BAB”s theme,) —the all-round concept was “A Possible Island” she informed.

Vandana went through many skype interviews, and it was a dream come true, when she was finally selected. During her long duration performance at the Bangkok Arts and Culture Centre, Vandana stares fixedly at a candle flame for long hours. She sometimes moves, changes the candle, cuts some fruits, then, goes back to her stationary pose. This has been going on continuously for nearly two weeks, from 12 noon to 8 pm. The audience circulate all around her, some sit next to her and gaze at her (like I did). She is aware of it all, but at the same time she is out of it, and in a world of her own.

“The flame is important in Hindu scriptures”, she stated, “To me, it is the representation of the soul or the self, and this is totally a soul searching experience for me!” stated Vandana

During her lecture in the city, the great Marina Abramovic spoke of the eight performance artists at BAB. About Vandana, she said, “She chose a candle, which is so simple, and so peaceful!”

Vandana declared that this performance show was “the culmination of my 18 years of artistic struggle.”

“This is my highest platform so far, but I do hope that I can do a lot more good work, and this platform will prove to be my first stepping stone”, said the artiste, with feeling.