India   All India  09 Nov 2017  Smog leads to pile up in Yamuna expressway
India, All India

Smog leads to pile up in Yamuna expressway

Five vehicles were on their way to Agra and eight vehicles going to Delhi collided on the expressway, the police said. 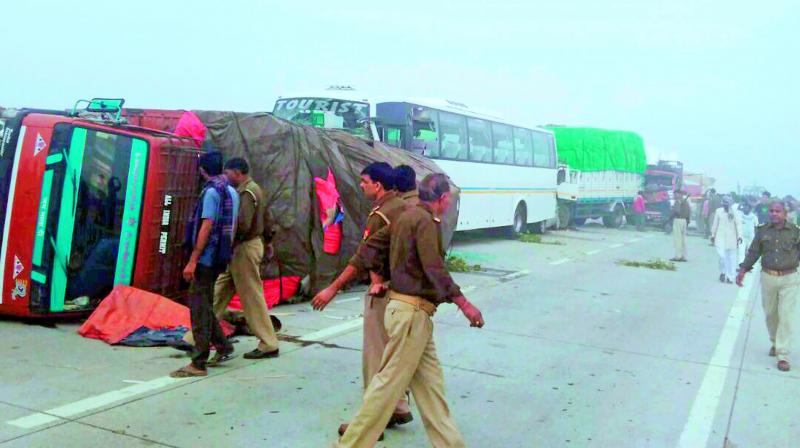 Police personnel at the accident site after nearly 18 vehicles slammed into each other, repotedly due to poor visibiliy owing to dense smog layer, at Yamuna Expressway near Mathura on Wednesday morning. (Photo: PTI)

Lucknow: Owing to the smog, six people were injured after nearly two dozen cars were caught in a pile-up on the Yamuna Expressway on Wednesday morning.   The injured persons have been admitted to various nearby hospitals.

The incident was first reported near Dankaur police circle in Greater Noida. Meanwhile, the Expressway stretch under Mahavan police circle in Mathura also faced the same near the 125 milestone.

Five vehicles were on their way to Agra and eight vehicles going to Delhi collided on the expressway, the police said.

“Seven cars are still on the spot due to severe dents, while six immediately moved from the spot. Men and machinery have been pressed to action”, the police official said.

Dankaur’s station house officer Farmood Ali Pundir said that the collision took place on both sides of the expressway.

“There are reflectors near the eastern peripheral flyway, which is under construction. People could not see the barricades due to low visibility and ran over it. All the vehicles hit bumper to bumper,” he said. The cops reached after two hours, locals alleged.

Meanwhile, two people were killed and a dozen injured in three separate road accidents in Aligarh district.The first accident took place at the Khaireshwar when a truck collided with a tractor. The second took place on the Palwal-Aligarh highway where there was a pile-up of four vehicles.

About a dozen persons were injured in this mishap. The police spokesperson said in Lucknow that in view of prevailing smog condition, warnings would be given to those travelling on the expressway at the entry points. The spokesperson said that the route had been cleared.