Congress leader and six-time Himachal Pradesh Chief Minister Virbhadra Singh is fighting against Dhumal to be the next head of the state. 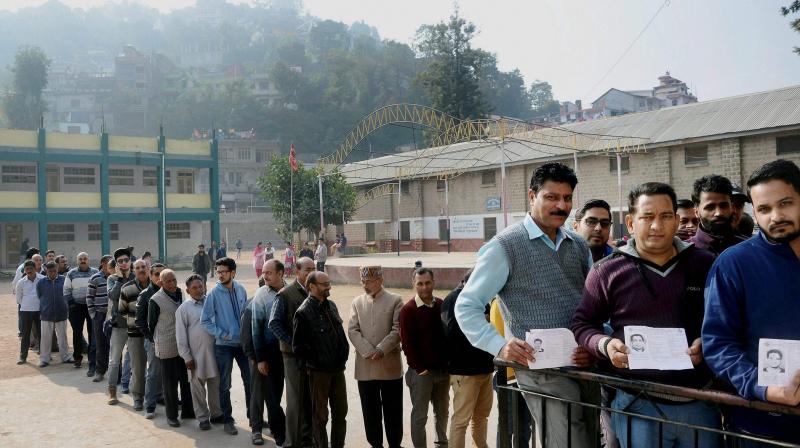 Voters in a queue show their voter identity card at a polling booth in Mandi, Himachal Pradesh. (Photo: PTI)

Shimla: Himachal Pradesh on Thursday recorded its highest polling in assembly elections with 74 per cent of voters exercising their franchise, the Election Commission said on Thursday.

"Till now 74 per cent voting has been recorded in Himachal Pradesh, but it is likely to go up," the Election Commission told the media personnel.

A total of 54.09 per cent polling was recorded till 2 pm in the polls.

The voting was conducted in 68 assembly constituencies of Himachal Pradesh in a single phase to choose the next chief minister of the state.

A total of 337 candidates, including 19 women, are in fray to sweep the polls in the hilly state.

As many as 50,25,941 voters are eligible to cast their votes and 37,605 polling personnel have been deployed at 7,525 polling booths. 983 polling stations had been declared vulnerable and 399 as critical to ensure free and fair elections in the state.

Congress leader and six-time Himachal Pradesh Chief Minister Virbhadra Singh is fighting against Dhumal to be the next head of the state.

The counting of votes will take place on December 18.