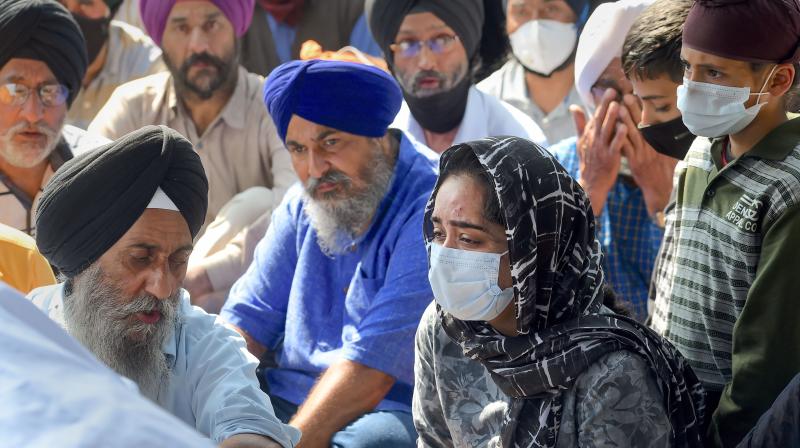 Relatives wail during the funeral of Satinder Kaur, a government school teacher who was killed by militants, in Srinagar, Friday, Oct. 8, 2021. (PTI/S. Irfan)

Srinagar: Jammu and Kashmir’s political parties and leaders on Friday urged the government and also the minority communities not to allow a repeat of 1990 when a vast majority of Hindus, mainly Pandits, fled the Valley to escape violence.
They pledged to play their role in preventing fresh exodus of the members of minority communities following a spate of target killings.

However, the J&K police had on Thursday sought to dispel the notion that the members of minority Hindus and Sikhs are the prime target of militants and said that out of 28 civilians killed by them, so far, this year only seven - five locals and two outsiders - belonged to these communities and that the rest were local Muslims.

Asserting that the terror attacks in which three Hindu and one Sikh civilians were also killed were aimed at creating a wedge between the communities, former chief minister and National Conference leader Omar Abdullah made a fervent appeal to the members of minority communities not to leave the Valley.

“I can understand the pain and fear the families of slain are going through and also the members of minority communities. I believe these attacks are aimed at driving a wedge between the communities and to pushing them out of Kashmir. We can’t let that happen,” he told reporters after visiting the home of one of the victims Supinder Kaur.
Assuming that the target killings could also be aimed at forcing another exodus of Hindus, he said, “I appeal to the members of the minority community don’t allow a repeat of the early 1990’s and not to leave your homes out of fear.” He added, “We will do our bit. I and my party will also continue to press for providing adequate security to ensure the safety of minorities in the Valley”.

People’s Democratic Party (PDP) president and former chief minister, Mehbooba Mufti, also visited Kaur’s home and assured the members of the minority communities of “full support” of her party. She, however, while talking to reporters alleged that it were the BJP government’s “wrong policies”, particularly those adopted post- August 5, 2019, vis-a-vis J&K that are “directly responsible for the fast worsening situation in the Valley”.
She denounced the target killings and also CRPF’s shooting dead a 28-year-old civilian Parvaiz Ahmad Gujjar in southern Anantnag district on Thursday night and said, “It’s an irony that it was stated by the government the slain youth was trying to attack forces.”
Against the backdrop of back-to-back target killings, People’s Alliance for Gupkar Declaration (PAGD), an alliance of Jammu and Kashmir’s mainstream opposition parties and their allies from the national Left parties, on Friday held an emergency meeting at the residence of its president Farooq Abdullah to discuss the situation and its possible fallout.