India   All India  09 Oct 2017  Foreigners mistaken as braid choppers in Jammu and Kashmir
India, All India

Foreigners mistaken as braid choppers in Jammu and Kashmir 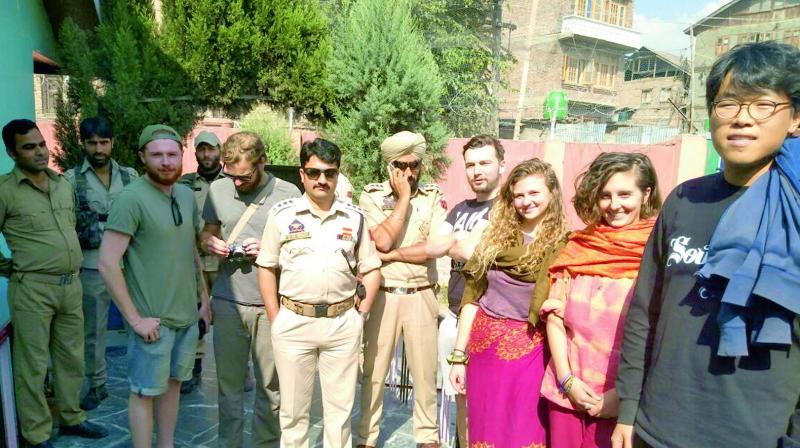 The six foreign tourists, mistaken as braid choppers, after being rescued by the police.

Srinagar: As Kashmir Valley continues to witness protests against the increased incidence of braid chopping, a group of six foreign tourists was detained by angry residents in Srinagar’s Rainawari area on suspicion of being involved in the crime on Saturday.

However, the police immediately rushed to the area and rescued them, claimed an official release. It said that the station house officer of the Rainawari police station, G.P. Singh, was alerted by the police control room and “some sources” stating that six foreign tourists have been rounded up by some people on the suspicion of being braid choppers. A police team rushed to the area and “rescued” the detained tourists during which it received cooperation from some locals, the release said.

The police investigations revealed that the tourists, including three Australi-ans and one each from South Korean, Ireland and England (four males and two females), were travelling from Leh to Srinagar in a Tavera vehicle driven by one Aabid Hussain, a resident of Jammu’s region’s Doda district.

“The group had lost way and was travelling with the help of Google Map which led it to travel across a link road showing a shortcut to Lal Chowk. On reaching Kanikachi Lati Mohalla, the vehicle was stopped by a group who on spotting foreigners in the vehicle started a hue and cry which caused a large gathering on the spot turning into an unruly mob. However some locals started rescuing the holed up group and called the police,” the police statement said. It added, “With great efforts of the police and the reasonable public, the group was rescued. Tourists were taken to a local hotel where they spent the night and on Sunday morning were seen off by senior police and tourism officials before they started the journey for their next generation,” the police said.

Meanwhile, the security has been tightened further in view of a strike call issued by an alliance of key separatist leaders on Monday against the growing number of braid chopping incidents.

Various schools and other institutions have announced holiday on Monday as a precautionary measure. The J&K police have constituted Special Investigating Teams to probe the incidents. They established 24x7 helplines in all the ten districts. In addition, the police will also organise community group meetings to seek the help of the people in the stepped up vigil in the respective areas.