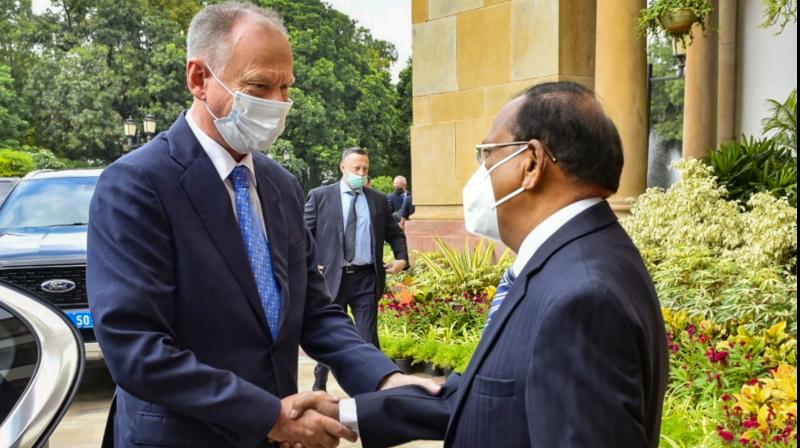 New Delhi: In a strong signal to the Pakistan-backed Taliban and Islamabad, the national security advisers of India and Russia held detailed talks in New Delhi in which both sides are learnt to have expressed deep concern over the developments in Afghanistan, the need for the Taliban to adhere to promises, the spectre of radicalism and terrorism, the presence of terror groups in Afghanistan and the threat posed to India and Central Asia.

At the “High Level India-Russia Inter-Governmental Consultations on Afghanistan” on Wednesday, NSA Ajit Doval and Russia’s Gen. Nikolai Patrushev are understood to have also discussed the flow of weapons to terrorist groups and smuggling across Afghan borders, and the chances of Afghanistan becoming a hub of opium production and trafficking. The Russian dignitary also later called on Prime Minister Narendra Modi and met external affairs minister S. Jaishankar, with the Afghan situation figuring in both those separate discussions.

At the talks with Gen. Patrushev, secretary to Russia’s Security Council (equivalent to NSA), Mr Doval is learnt to have emphasised Pakistan’s links with the Taliban and other international terrorist groups operating in Afghanistan, and also the special responsibility Pakistan has to ensure that Afghan soil is not used to spread terrorism. Mr Doval is also learnt to have highlighted the links of Pakistan’s ISI with Pakistan-based terror groups operating in Afghanistan like Lashkar-e-Tayyaba and Jaish-e-Mohammed. The two are also understood to have discussed concrete forms of future bilateral cooperation among security agencies, including close coordination, upgrading consultations and information exchanges.

Despite the fact that Moscow of late has seemed soft on the Taliban, Russia’s concerns seem to be growing after the recent developments in Afghanistan, including the attack on the Panjshir valley by the Taliban which have angered both Iran and Russian ally Tajikistan.

Ironically, time-tested friends India and Russia had a stark difference of views on Afghanistan before the Taliban takeover. India had strongly supported the Western-backed erstwhile government of then President Ashraf Ghani while Russia had pitched for a strong role for the Taliban and made no secret of its dislike for the erstwhile Afghan government which collapsed last month following the fall of Kabul on August 15 to the Taliban.

Russia, meanwhile, put out a statement saying Mr Doval and Gen. Patrushev had an exchange of views on the military, political and socio-economic situation in Afghanistan wherein the “importance of defining parameters of the future state structure of Afghanistan by the Afghans themselves, as well as the need to prevent the escalation of violence, social, ethnic and confessional contradictions in the country, were emphasised”. Moscow also said both discussed deepening bilateral cooperation in the field of security with an emphasis “on further interaction on the anti-terrorist track, combating illegal migration and drug trafficking”, adding that “in addition, both sides agreed to coordinate the approaches of Russia and India in multilateral formats on the Afghan settlement”. It also said “attention was paid to intensifying the joint work of both countryies’ special services and military bodies”.

Prime Minister Narendra Modi tweeted: “Was happy to meet Mr Nikolai Patrushev, Secretary of the Security Council of Russia. His visit allowed useful discussions between both sides on important regional developments.” The PMO in a statement said: “Secretary Patrushev briefed Prime Minister on his fruitful exchanges with NSA and EAM earlier in the day ... The Prime Minister expressed his appreciation for the visit of the Russian delegation led by Secretary Patrushev at a time when major changes are taking place in the region. ... He also said he was looking forward to welcoming President Putin in India in the near future, for the bilateral summit.”