According to him, Monday is a special day for Chandran God. Chandran is also known as ‘Thingal’ in Tamil and Monday in Tamil is ‘Thingal’. 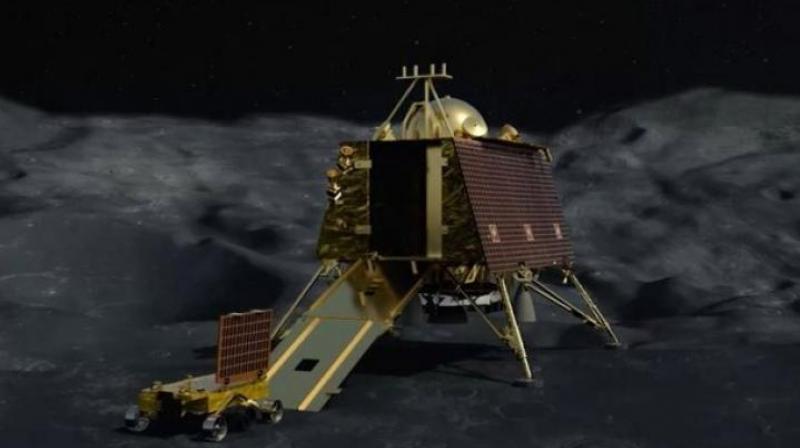 “In the morning we had special abhishekam for the blessings of Chandran so that communication link can be established with Vikram,” V. Kannan, Manager at the Sri Kailasanathar Temple or Chandranaar Temple said.

He said it was unfortunate that Vikram had some problems.

According to him, Monday is a special day for Chandran God. Chandran is also known as ‘Thingal’ in Tamil and Monday in Tamil is ‘Thingal’.

“The lander seems to have hit the lunar surface and is in an upturned position,” an official told IANS preferring anonymity. He also said there is a possibility of the lander getting broken on impact. The pictures were taken by India’s Chandrayaan-2 orbiter that is orbiting the Moon.

The Orbiter camera is the highest resolution camera (0.3m) in any lunar mission so far, and shall provide high resolution images which will be immensely useful to the global scientific community, ISRO had said.

A special puja was also organised for the success of Chandrayaan-1 before the rocket lifted off in 2008, Kannan said. “We didn’t offer any special prayers before July 15 when Chandrayaan-2 was first planned to be launched. Owing to some technical problem, the launch was postponed,” Kannan said.

“We thought the technical snag may be due to the non-offering of prayers to the Moon God. Hence, prior to the Chandrayaan-2 launch on July 22, special prayers, ‘abhishekam’ and ‘annadhanam’ were conducted,” Kannan said.

On September 6, the day prior to Vikram’s scheduled landing on the lunar surface, special prayers and ‘abhishekam’ were held at the temple.

Kannan said the special prayers were their contribution for India going forward in its scientific programme.

While the presiding deity at the temple is Soma (Moon), the main deity is Lord Shiva.

The Chandranaar Temple is one of the Navagraha temples, all located near Kumbakonam, and devotees pray at these temples to get rid of negative planetary influence on them.

According to Kannan, around 500 devotees come to the Chandranaar Temple daily and on Mondays the number goes up to 5,000.