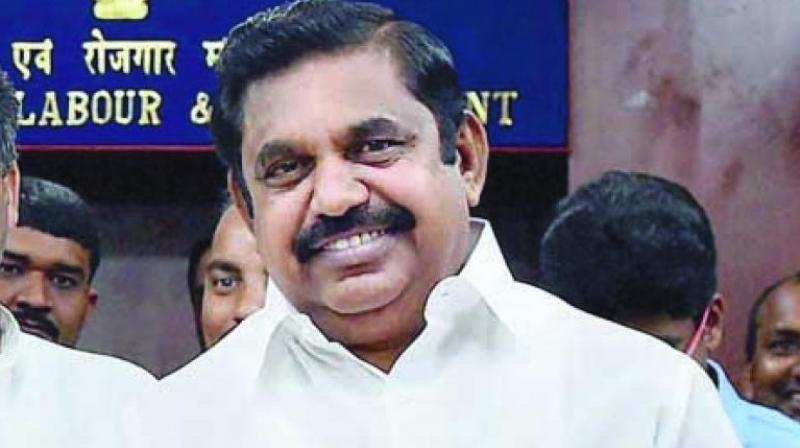 Chennai: Tamil Nadu Chief Minister K Palaniswami met investors in the UAE on Monday and told them that it would be mutually beneficial for both sides if they decide to invest in the state.

This is the first time Palaniswami, 65, visited the UAE after taking charge as the chief minister of Tamil Nadu in 2017.

Addressing the investors, the chief minister said, "Tamil Nadu has been taking various initiatives to promote sectors like e-vehicle manufacturing, electronics, hardware and software, food processing, aircraft MRO facilities, and so on."

The investors roundtable was hosted by the Business Leaders Forum (BLF), an initiative of the UAE's Ministry of Economy, the Indian Embassy to the UAE, the Consulate General of India in Dubai, and the India Trade and Exhibition Centre.

"This visit is to seek tangible investments for Tamil Nadu that is mutually rewarding for both the state and the investors. I am happy that the business community in the UAE and the investors here are very keen to know more about our offerings for investment," Palaniswami added.

He said market research company Frost and Sullivan had ranked Tamil Nadu as second in overall ranking and first in investment potential among other Indian states, while India Today magazine placed the state as the number one destination in overall performance.

"We have taken up a series of measures to simplify and rationalise the regulatory processes (registration and inspection) by deploying information technology to make governance simpler, responsive, transparent, accountable and efficient," he said.

"Tamil Nadu is the second largest state economy in India, contributing 8.4 per cent to the nation's GDP. It is also an industrial powerhouse of the nation with a very strong and diverse infrastructural base," he added.

Consul General of India to Dubai Vipul said, "The UAE is the last stop of Mr Palaniswami's three-nation tour. Before his arrival in Dubai, the Tamil Nadu Chief Minister visited the UK and the US to woo investors to the state, which is promoted as one of Asia's most preferred investment destinations."

President of BLF Paras Shahdadpuri said there is huge potential to invest in Tamil Nadu and with this maiden roundtable only surface had been scratched.

An officials state government release on Thursday said Tamil Nadu had received Rs 5,000 crore investment during the visits to the UK and US.