'If a lion is alone, wild dogs can invade and destroy the lion. We must not forget that,' RSS chief Mohan Bhagwat had said. 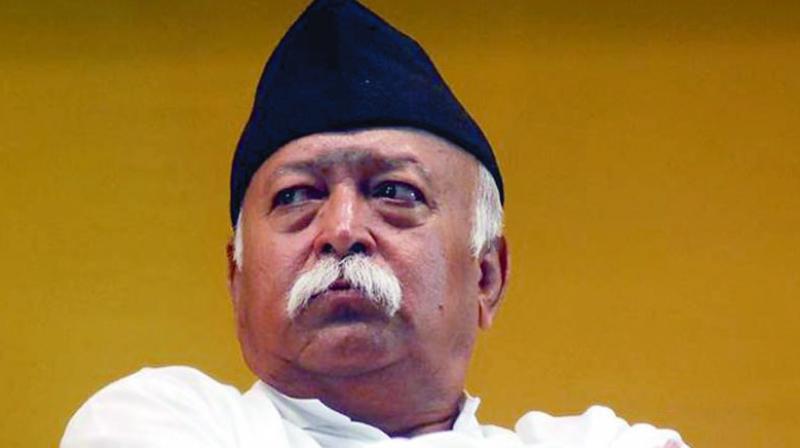 'We want to make the world better. We have no aspiration of dominance. Our influence is not a result of conquest or colonisation,' Bhagwat said. (Photo: File)

Speaking at the second World Hindu Congress in Chicago, US on Friday, Bhagwat had said that Hindus had no aspiration of dominance and the community would prosper only when it worked as a society.

“If a lion is alone, wild dogs can invade and destroy the lion. We must not forget that,” the Rashtriya Swayamsevak Sangh (RSS)chief had said.

“We want to make the world better. We have no aspiration of dominance. Our influence is not a result of conquest or colonisation,” he added.

Attacking Bhagwat over his remarks, All India Majlis-E-Ittehadul Muslimeen (AIMIM) chief Asaduddin Owaisi said the RSS was demeaning others.

“The RSS is trying to demean people by calling others dogs and assuming themselves as the tiger,” Owaisi said.

This has been the language of RSS and people will reject it, he added.

Meanwhile, Dalit leader Prakash Ambedkar claimed that the “dog” reference was for the “Opposition parties” in the country.

“I condemn this ‘mansikta’ (mentality) of Mohan Bhagwat that he has referred to Opposition parties in the country as dogs,” the Bharipa Bahujan Mahasangh leader said.

The Opposition Congress and the Nationalist Congress Party (NCP) in Maharashtra too slammed the RSS and alleged that its ideology was “anti-Hindu”.

NCP spokesperson Nawab Malik said, “The ideology of RSS and BJP is anti-Hindu and they only know how to do caste politics.”

“The day they stop dividing Hindus on the basis of caste, every Hindu and people from other religions as well will be lions,” Malik added.

Congress leader Sachin Sawant said, “RSS ideology is anti-Hindu. It is known for hatred towards other castes and religions. It is shameful of the RSS chief to describe any religion in this way.”

However, Madhav defended Bhagwat and said that the RSS chief has always spoken for the welfare of Hindu society and the country.

The WHC marks the commemoration of the 125th anniversary of Swami Vivekananda’s historic speech at the Parliament of the World’s Religions in 1893 in Chicago.