A Congress official said according to a PIB release, the RFP issued by UPA government completely exposes the “lies” of the PM. 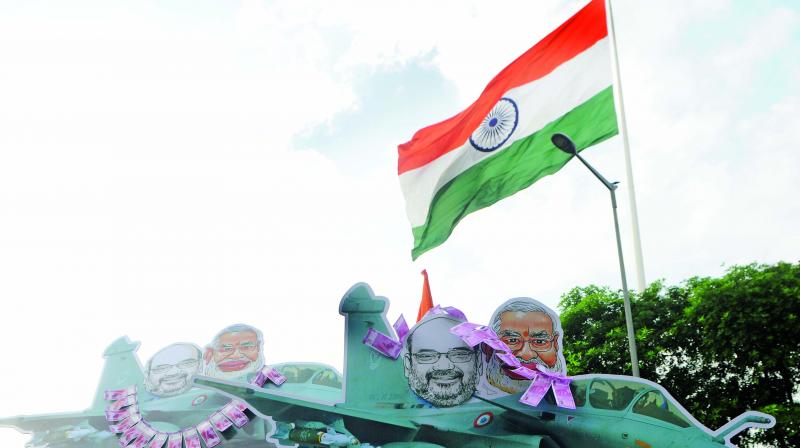 New Delhi: Seeking replies from Prime Minister Narendra Modi and defence minister Nirmala Sitharaman, Congress spokesperson Randeep Singh Surjewala asked when the ‘associated systems and weapons’ were the same as approved by the Indian Air Force during UPA regime, then how did the cost per aircraft has gone up now.

“It is now clear that the ‘India-specific enhancements’ mentioned by Mr Modi and Mrs Sitharaman on the floor of Parliament and outside are those which were pre-decided by IAF at the time tender of 126 Rafale fighter aircrafts were issued by Congress-led UPA government,” said Mr. Surjewala.

Accusing the NDA government at the Centre of “compromising national security”, Mr. Surjewala asked why did the Bharatiya Janata Party-led Centre allegedly forego ‘transfer of technology’ and reduced the number of aircraft under Rafale deal from 126 to 36. Mr. Surjewala also asked the Centre how the price of the fighter aircraft went up when ‘India-specific enhancements’ for it were the same as were decided during the UPA rule.

Slamming the Modi government for its claims that there was no contract for transfer of technology under the Rafale deal during the UPA rule, the Congress leader said according to a PIB release, the RFP issued by UPA government completely exposes the “lies” of the PM and the defence minister. “It mentions transfer of technology, licensed production, and lifetime maintenance support for the aircraft,” he said.