Rs 10 lakh reward for clues on killers of Gauri Lankesh

Reddy said the government had stepped up the investigation, and deputed abundant personnel to SIT. 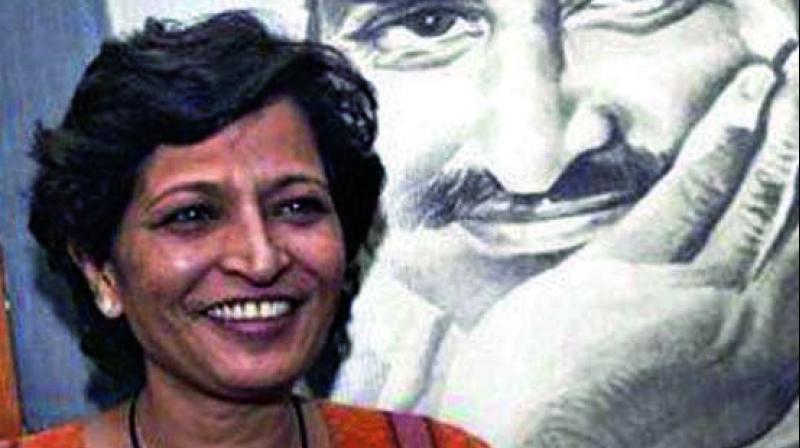 Bengaluru: The state government announced a bounty of Rs 10 lakh for anyone who can provide vital information on the assailants who killed journalist and activist, Gauri Lankesh as the SIT probing the murder case hit a brick wall with the grainy CCTV footage proving to be of little help in identifying the gun-wielding motorbike-borne assassin or assassins.

“The case, so far, is nothing but a blind murder case,” the team told this newspaper.

Shifting their focus, sources close to the investigation said that the SIT team which returned to Lankesh’s home to recreate the murder scene on Friday, now suspect that Lankesh’s assassins may have come from outside Bengaluru and had probably holed out in one of the many lodges that dot the  Bengaluru South and West divisions and may have even changed their place of residence many times over.

Since Friday morning, special teams have fanned out to check on stayers at the lodges, focusing on people staying for a longer duration as it was suspected that the killers had been following Lankesh for the last 15-20 days before they struck on Tuesday night.

“We were sure to begin with that we would get clues about the killers through the CCTV footage. But, there were many white cars and scooters passing the frames. We couldn’t identify Lankesh’s car or the bike-borne assassins,” a police source said.

“We believe the assassins may be hired killers and had come to the city to execute their job 20-30 days ago,” sources added.

Amid suspicions that the killers may not have checked out and had simply vanished using the road leading out of Raja Rajeshwarinagar to the Mysore highway as their getaway route, investigators are looking to see if the same names surface in the registers of different lodges, and if any of them do not show up in the check out ledgers.

Mr Reddy said the government had stepped up the investigation, and deputed abundant personnel to SIT. “They are doing the job round the clock. They are collecting information from all sources,” he said, adding that this included investigating threats from the left wing and the family, with importance given to the threats from right-wing activists as the case bore similarities with the killing of Dr. M. M. Kalburgi’s and that Lankesh openly criticised right-wing ideologies.

Sources said that though the Naxal angle is being probed, it had taken a back seat. “In any incident involving Naxals, they will leave some clue to show that it is their act. In most of the cases, they throw Naxal related pamphlets at the crime scene to make it clear that why they committed the act. But in this case, no such signs are there. As Lankesh explicitly criticised and aired her views against right wing ideology, we have given importance to that angle. On the personal front, we have not got any reason that would lead to a murder,” an official said.

On Friday, the SIT held several rounds of meeting to discuss the probe done so far and to exchange information gathered by various teams. The SIT officials also held talks with forensic experts, who also visited the crime scene.

“The modus operandi and the weapon used in the crime are similar to Dr. M. M. Kalburgi’s case. However, we are yet to receive certain articles from the police, which they seized from the crime scene. Only after examination and analysis of the bullets, cartridges and studying the nature of injury can we come to a conclusion whether both the murders are committed by the same gang,” an FSL expert said.