Prasad asked that how one could expect a fair probe when Rahul Gandhi had already accused right-wing elements for the killing. 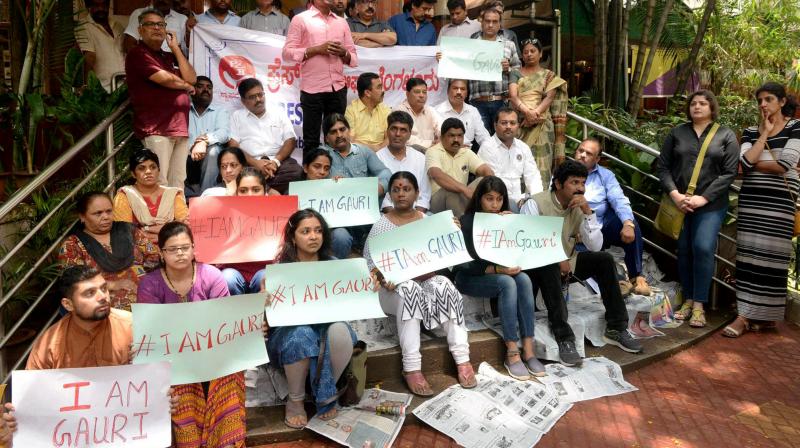 Journalists hold placards during a protest against the killing of journalist Gauri Lankesh, who was shot dead by motorcycle-borne assailants outside her residence last night, in Bengaluru. (Photo: PTI)

New Delhi: The BJP on Friday went on the offensive to counter the Opposition particularly Congress’ charges that right-wing elements were allegedly involved in the cold-blooded murder of senior journalist Gauri Lankesh.

Union law minister Ravi Shankar Prasad took on the Opposition charges raised by Rahul Gandhi, who has been blaming BJP and RSS for the journalist’s murder. While asking him to refrain from politicising the issue, he wondered how the Congress leader did not question his party’s government in the state for its failure to provide security to the journalist. Mr Prasad asked that how one could expect a fair probe when Rahul Gandhi had already accused right-wing elements for the killing.

The matter also spilled over into social media. Senior Congress leader Digvijay Singh was attacked by the BJP for putting up an abusive post on Twitter against Prime Minister Narendra Modi. Initially, Mr Singh had put up a Youtube video with an abusive caption against the PM. He had attributed the abusive caption of the Youtube video to a senior TV anchor. Later, Mr Singh apologised to the anchor and claimed that he had nothing to do with the absuive language used against the Prime Minister.

An angry BJP spoksperson, G.V.L. Narasimha Rao, however, lashed out at Mr Singh and said, “His crass comments against the Prime Minister  demonstrate the degeneration of a party that takes prides in its great legacy. These comments amount to insulting 130 crore people of India whose mandate is vested in the Prime Minister. The Congress party will have to publicly apologise for the filthy abuse of its front-ranking leaders who in the wake of repeated electoral drubbings have degenerated into abusive trolls on social media.”

Mr Singh, so far did not appear to be in any mood for an apology instead hit back saying, “BJP should not lecture me on moralities, it has called the slain journalist names.” Mr Singh also asked what kind of “cultural background” the BJP leaders who had called “Gandhiji a traitor” come from.

The BJP also tried to counter the #BlockNarendraModi campaign on Twitter saying that “He (Modi) never blocks anyone” and following someone “is not a character certificate”. There had been allegations that the Prime Minister was following the trolls on Twitter.

Mr Prasad kept reiterating the journalist’s brother Indrajit Lankesh’s remarks that the assassination could have been carried out by Naxalites. Flashing copies of news reports quoting Indrajit Lankesh, Mr Prasad said, “Indrajit Lankesh is on record having saying  that his sister was working actively to ensure the surrender of Naxalites. Was she doing it with the consent and approval of the state government? If so why was she not provided adequate security?”  There were rumours that Gauri’s estranged brother Indrajit was expected to join  BJP before the Karnataka Asembly polls, which he has denied so far.

Hitting back, the Congress spokesperson Randeep Singh Surejwala said, “The BJP and the law minister have given a controversial and a condemnable statement and shamed the entire nation by linking Gauri Lankesh with the Naxalites.”  Mr Surejwala also alleged that the trolls being followed by the Prime Minister had “openly celebrated the murder of Gauri Lankesh on social media”.  Mr Surjewala who questioned the “silence” of the Prime Minister on the murder of Gauri Lankesh also wanted to know “why he (Modi) follows the trolls”.

Mr Shankar also raised the issue of  the killing of RSS workers in Kerala. “Why is that all my liberal friends who speak so eloquently and strongly against the killing of a journalist... maintain conspicuous silence when so many RSS and BJP workers were killed in Karnataka and Kerala.”