India   All India  09 Aug 2020  AI plane touched down 1 km away from runway threshold
India, All India

Some of my colleagues in the political system have raised queries regarding Kozhikode air accident without ascertaining facts, Puri tweeted 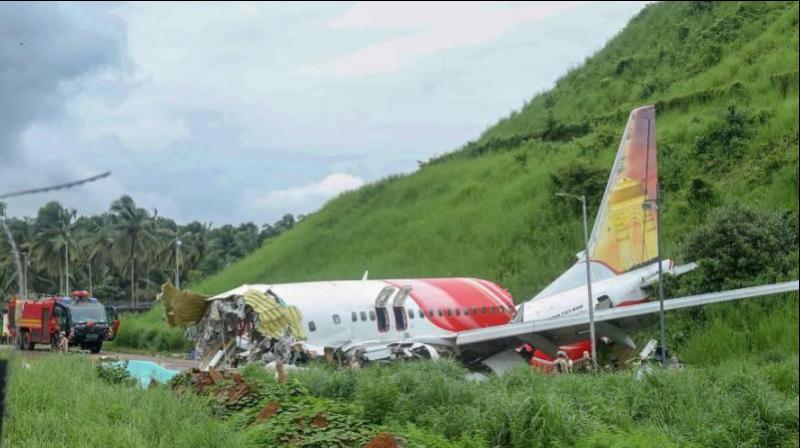 The Boeing 737-800 plane, coming from Dubai, had overshot the runway while landing in heavy rains and broke into two pieces. (Photo- PTI)

New Delhi: The ill-fated Air India Express flight IX-1344 which crash-landed at Kozhikode (Calicut) airport in Kerala on Friday evening killing 18 people on board had touched down near taxiway ‘C’ which is approximately a distance of 1000 m from the beginning of runway 10  which has a total length of 2,700 m, the Airports Authority of India (AAI)  said.

Citing information from the Air Traffic Control (ATC), AAI also said the pilot “attempted first a landing on runway 28 but could not sight the runway and subsequently carried out a missed approach (known popularly as go-around) and requested for runway 10,” adding that at the time of the (second attempt at) landing, it was raining over the airfield while the reported visibility was 2000 m.

Hardeep Singh Puri tweeted late Saturday evening that several issues pertaining to the Kozhikode airport were red-flagged by the Directorate General of Civil Aviation (DGCA) pertaining to “excessive rubber deposits, water stagnation, cracks and other routine issues." These were rectified promptly and remedial measures carried out fully by the Airports Authority of India.

The minister tweeted, “Some of my colleagues in the political system have raised queries regarding Kozhikode air accident without ascertaining facts. It is indeed a fact that several issues were routinely red flagged by DGCA, & were addressed by the airport operator. These pertain to excessive rubber deposits, water stagnation, cracks & other routine issues. The short point is that raising such concerns is the normal work of DGCA.  DGCA also strictly ensures that these are complied with & rectified under all circumstances. This was done by the airport operator.”

The minister assured that the findings of the enquiry being conducted into the crash-landing of the Air India Express flight at the Kozhikode airport would be made public, adding that the aircraft that had crashed was a Boeing 737-800 (narrow-bodied aircraft) and not a wide-bodied aircraft (about which questions had been raised from some quarters).

The Minister further said, “Most importantly, as in case of Kozhikode accident, an enquiry has been ordered under Aircraft Act, black boxes of flight IX-1344 have been recovered. Findings of this investigation will be made public. I would like to remind my colleagues that the aircraft involved in the incident at Kozhikode was a B-737-800 which is not a wide body aircraft. As far as wide body aircraft are concerned, DGCA had carried out a thorough assessment & prescribed comprehensive mitigation measures.”

He added, “AAI strengthened the runway & thereafter necessary permissions were issued in 2018 to operate wide body aircraft. Consequently, certain carriers started operating some flights with wide body aircraft to Kozhikode Airport. Kozikhode Airport has a total footfall of 3.2 million passengers per annum with 70-80 aircraft movement per day.  The total wide body operations are only 4% of the total.”

The Digital Flight Data Recorder (DFDR) and the Cockpit Voice Recorder (CVR)—popularly known as the two black boxes—of the ill-fated 737-800 aircraft have been retrieved, minister for civil aviation Puri, said, adding that the pilot-in-command (PIC) Capt. D.V. Sathe was an “experienced, distinguished and highly-decorated pilot” with over 10,000 hours of flying experience and had landed on the table-top Kozhikode airport 27 times previously.

Capt. Sathe along with the co-pilot Capt. Akhilesh Kumar perished in the crash, the causes of which will be known after the probe being conducted by the Aircraft Accident Investigation Bureau (AAIB) which is mandated to probe serious incidents and accidents involving aircraft.

The probe by the AAIB is therefore expected to include why the pilot did not land at some other airport as per Standard Operating Procedure (SOP) when he could not sight the runway due to the heavy downpour.

A major controversy was also triggered after aviation safety expert Capt. Mohan Ranganathan told a TV channel that he had warned aviation authorities way back in 2011 in his capacity then as member of the Civil Aviation Safety Advisory Council (CASAC) that the Kozhikode airport was not fit for landing of aircraft as per safety standards, adding that the deaths in Friday’s crash at Kozhikode were therefore nothing short of “murder”.

A table-top airport is usually constructed by flattening a hill-top and is surrounded by hilly terrain and valleys and pilots therefore have to be extremely careful while landing aircraft at these airports. Another Air India Express flight had crashed at yet another table top airport at Mangalore, Karnataka, a decade ago killing 158 persons on board.

Air India’s subsidiary Air India Express said its deceased pilot Capt. Sathe—also a former IAF pilot---was very experienced and had earlier won the Sword of Honour at the Air Force Academy in Hyderabad. He was also an accomplished fighter pilot before becoming a commercial pilot, the airline said.

In a statement, AAI on Saturday said, “Calicut airport is a table-top runway. It was raining over the airfield and reported visibility at the time of landing was 2000 M and wind direction and speed was 270/08 (wind was gusting from 8 to 17 knots). The runway in-use was runway 28 and the pilot attempted first landing on runway 28 but could not site the runway and subsequently carried out a missed approach and requested for runway 10.”

The AAI added, “Both the runways at Calicut are equipped with Instrument Landing System (ILS).  Airports safety services were pressed into action as per airport emergency plan for timely action. As per the information received from ATC, the aircraft touched down near taxiway ‘C’ which is approximately 1000 M from the beginning of runway 10 and the total length of runway is 2700M.”