In one of the clips, an unknown person accompanying Mahajan is seen taking selfie video as they rode through water in parts of Kolhapur. 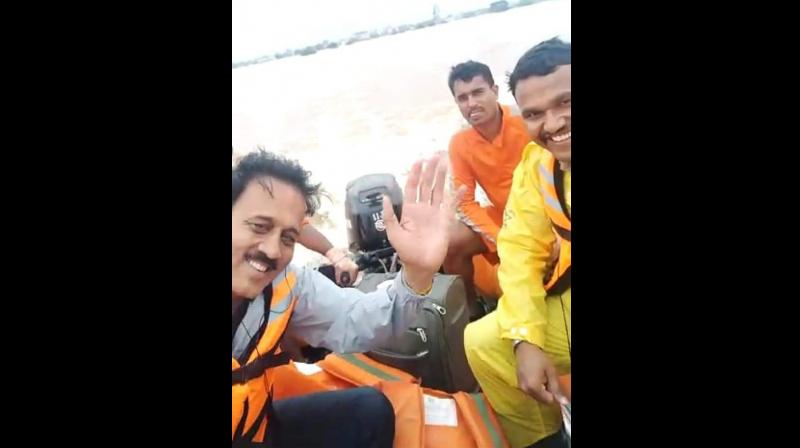 Maharashtra minister Girish Mahajan was seen smiling and waving in one of the videos during flood survey in Kolhapur, Maharashtra. (Photo: Twitter | @VinayMIRROR)

This prompted the opposition NCP to rebuke Mahajan.

Questioning if the minister was on "tourism", the NCP asked Chief Minister Devendra Fadnavis to seek resignation of the "insensitive" water resources minister.

In one of the clips, an unknown person accompanying Mahajan is seen taking selfie video as they rode through water in parts of Kolhapur in western Maharashtra.

27 people lost life in western Maharashtra due to floods. pic.twitter.com/xg6QJcLJQq

The BJP minister can be seen smiling and waving hands in this clip.

In another clip, Mahajan is seen inspecting the flood situation standing on a road as the person filmed the selfie video.

Expressing grief over the death of a child due to floods, Leader of the Opposition in the State Legislative Council Munde of the NCP also asked Mahajan if he feels ashamed of his approach to the situation.

Parts of Maharashtra, particularly the Sangli and Kolhapur districts, are in the grip of devastating floods over the last week following heavy rainfall in the region.

As of Thursday, over two lakh people have been evacuated to safer places in the flood-ravaged districts.