Before leaving the venue, Modi greeted the teaming crowd of mourners with folded hands. 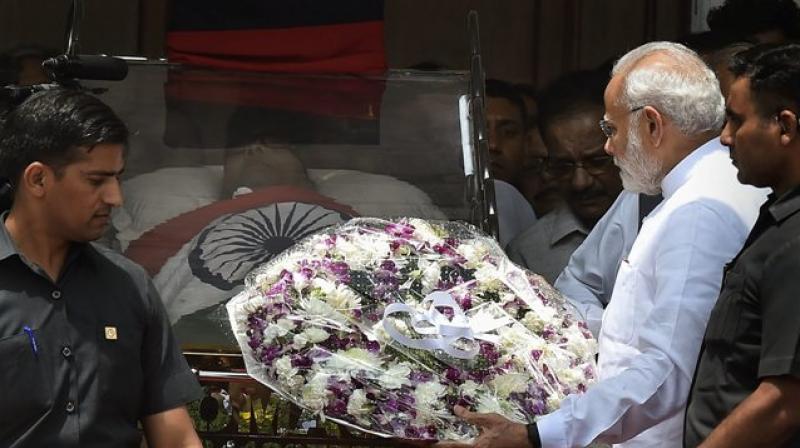 Chennai: DMK chief M. Karunanidhi is an extraordinary leader and a veteran administrator whose life was devoted to public welfare and social justice, Prime Minister Narendra Modi said on Wednesday.

The Prime Minister who arrived here by a special flight from New Delhi, paid homage to DMK president M. Karunanidhi after placing a wreath at his feet kept at Rajaji Hall here. Clad in white, Modi bowed before the mortal remains, and went around the casket in which Karunanidhi’s mortal remains were kept draped in the national tricolour. He consoled Karunanidhi’s son and DMK working president M. K. Stalin, and daughter Kanimozhi, MP, by holding their hands. After exchanging a few words with them, the Prime Minister consoled Karunanidhi’s wife Rajathi and other family members before leaving Rajaji Hall.

Before leaving the venue, Modi greeted the teaming crowd of mourners with folded hands. He was seen off by Stalin and other DMK leaders.

Shortly after paying rich tributes to the DMK stalwart at the Rajaji Hall here, the Prime Minister tweeted “In Chennai, I paid tributes to an extraordinary leader and a veteran administrator whose life was devoted to public welfare and social justice. Kalaignar Karunanidhi will live on in the hearts and minds of the millions of people whose lives were transformed by him.” He also posted photographs of him paying the last respects and consoling Stalin and Kanimozhi.