How the Marina Beach burial case was won

THE ASIAN AGE. | A ARUL PALANI

Madras high court and some legal issues and the government was ready to allot land on Sardar Patel Road opposite to Anna University. 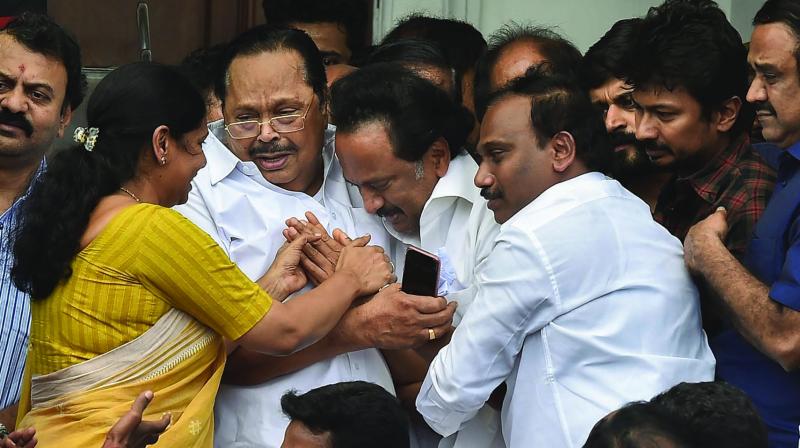 DMK leader M.K. Stalin (above) breaks down after the Madras high court’s verdict to allow the burial of his father M. Karunanidhi at Marina Beach. (Photo: Asian Age)

Chennai: Even after his death, the former CM and DMK chief M Karunanidhi, known in his lifetime for never giving up without a fight, won a battle before the Madras high court. The first bench allowed the party and family members to bury his mortal remains on the Marina in the space near the memorials of three Dravidian leaders and chief ministers. After a midnight hearing Tuesday night, which resumed Wednesday morning, the first bench comprising acting Chief Justice Huluvadi G Ramesh and Justice S.S Sundar allowed the plea of R.S. Bharathi, Organising Secretary, DMK, seeking a direction to authorities to allot land in Marina Beach near the tomb of Annadurai, former Chief Minister of Tamil Nadu, to bury the mortal remains of M.Karunanidhi.

Upon hearing the senior counsels on both sides and considering the entire conspectus of the matter, the bench said the writ petition was allowed with a direction to the authorities to provide a place for a “decent burial” to lay the mortal remains of (late) Dr Kalaignar M. Karunanidhi, former Tamil Nadu CM on the Marina beach, within the precincts of the burial place of founder of DMK and former CM, Annadurai, at Anna Memorial, Kamaraj Salai in consonance with a rough sketch provided by the petitioner. Such an exercise “shall be carried out by the authorities forthwith”.

In the petition, R.S. Bharathi, sought direction to allot land in Marina Beach near the tomb of Annadurai, former Tamil Nadu CM, to lay the mortal remains of Karunanidhi. The entire state is bereaved by the demise of this tall leader. It is only right and proper to give this leader his due respects by laying his mortal remains next to his beloved 'Aringnar Anna' to fulfil the wishes of millions of Tamilians.

He sought to set aside the Chief Secretary’s press release dated August 7 refusing to allot the land in the Marina beach tomb of Annadurai, citing pendency of cases before the Madras high court and some legal issues and the government was ready to allot land on Sardar Vallabhai Patel Road opposite to Anna University.