Kuttappa feels that India’s Asiad medal haul will depend on the draw but Solanki isn’t worried. 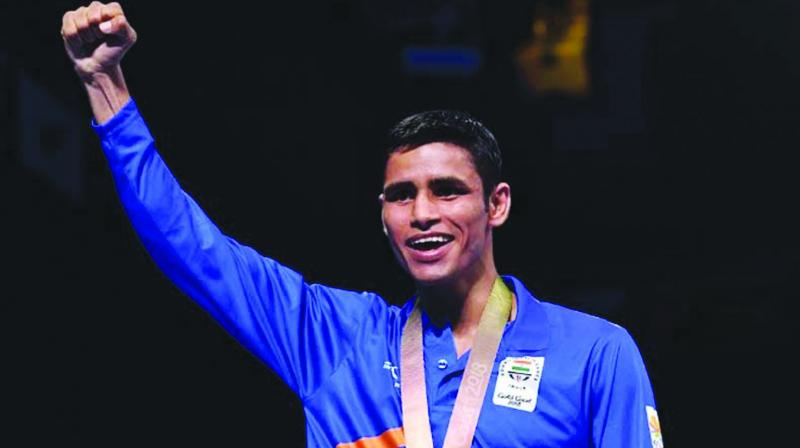 Mumbai: India have fielded a strong contingent for the Asian Games and experienced boxers like Vikas Krishan, Shiva Thapa, and Manoj Kumar are expected to lead the charge at the quadrennial event. Youngsters in the squad too have done well recently and can boost India’s medal haul at the Asiad that gets under way on August 18.

Gaurav Solanki is one such rookie who has raised expectations. The 21-year-old has been in top form winning gold at the Gold Coast Commonwealth Games, following it up with another gold at the Chemistry Cup in Germany. The Haryana boxer has been unstoppable in the flyweight (52 kg) category but is likely to face tough competition at the Asiad with top boxers from Uzbekistan and Kazakhstan in the fray.

The talented boxer though showed determination, continuing to fight despite two knockdowns, to register a remarkable win and qualify for the CWG final, which he later on went on to win.

“I want to extend that performance. Asia is regarded as the best continent for amateur boxing and there are many top boxers but we no less than anyone. It will be a good competition,” Solanki told this paper.

Solanki along with other boxers are training in Patiala under coaches Santiago Nieva and C.A. Kuttappa. “I have been here since October 2017, working with coaches to get better. My focus is on the Asiad and my ultimate goal is to win an Olympics gold .”

Kuttappa feels that India’s Asiad medal haul will depend on the draw but Solanki isn’t worried.

“Draw won’t matter much. We have a strong squad and should do well. Though we don’t know our particular opponents and can’t prepare specifically but we have done enough preparations to be ready for any opponent,” the boxer added.

Solanki, who comes from a humble background in Faridabad and practices  along with his siblings, said he will go for a gold in his maiden Asiad to make it memorable like his first CWG. “Boxing has given me a lot. But a lot more is yet to come. I will go for the gold. The hard work we put in and the support we get, I think we deserve to win gold,” he said.