Hyderabad store is the first of 25 outlets the Swedish furniture giant hopes to open by 2025 across the country. 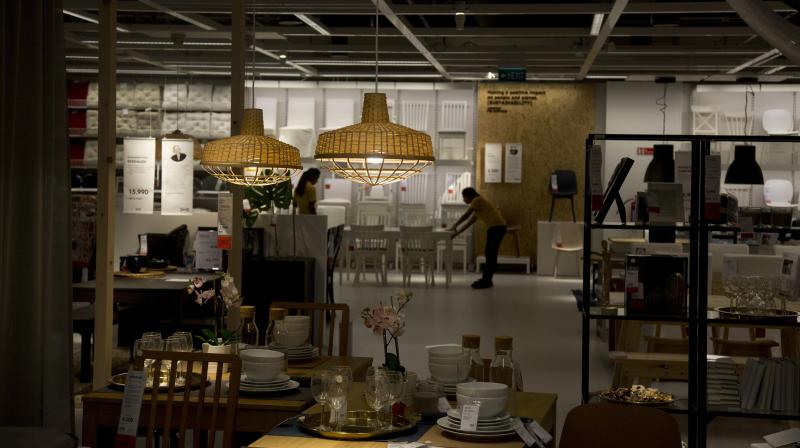 Staff arrange furniture inside India’s first IKEA store ahead of its opening in Hyderabad on Wednesday. (Photo: AP)

Hyderabad: Curious customers lay on beds and nestled into armchairs Thursday as IKEA opened its first Indian outlet, hoping to wow a burgeoning middle class with offerings tweaked to local tastes, including its famous meatballs.

Opened with a military band, the store in the southern city of Hyderabad is the first of 25 outlets the Swedish furniture giant hopes to open by 2025 across the country of 1.25 billion people.

Analysts say, however, that the firm's concept of affordable, self-assembly furniture may have trouble translating to a market where do-it-yourself homemaking is an alien idea and spending levels are low.

Around 200 people queued up in the underground car park before the opening, and were greeted inside by hundreds of blue-and-yellow clad employees on the stairs waving Swedish and Indian flags.

"I've come all the way from Bangalore (575 kilometres, 360 miles away). I am excited to see what's there," garment factory employee Krishna Mohan Dixit, 39, who began lining up 90 minutes before the opening, told AFP.

"We are looking forward to it. Actually it's my wife who got me here. Her sister sends a lot of IKEA stuff from Dubai. So here we are," said IT manager Nasrullah Khan, 34, another early bird.

Patrik Antoni, deputy retail manager for IKEA India, told AFP that he had tears in his eyes when the first customers arrived. "It is overwhelming, a dream come true," he said.

The changes compared with IKEA elsewhere start with the restaurant -- "Smaklig Maltid -- Enjoy your Meal in Swedish" is written on the wall -- with space for 1,000 people, the firm's biggest.

For religious reasons, the meatballs are not beef or pork but chicken or vegetarian instead, while Indians' beloved biryani dish was on offer for 99 rupees (USD 1.44).

On Thursday, the eatery was crowded, with people happy to queue up with their trays. 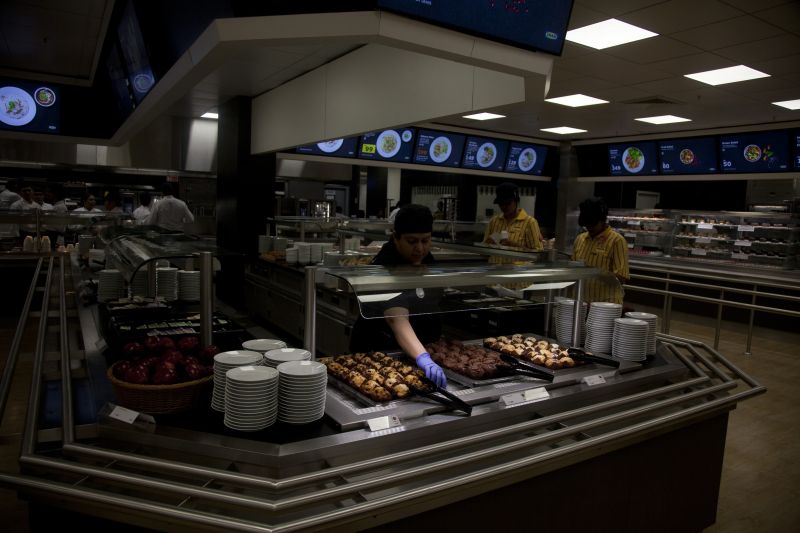 Bhaskar Reddy, 35, who runs a stock-broking company in Hyderabad and who lived in Sweden for about two years, opted to compare the food first.

"I quite like the meatballs. It's chicken and not beef but nice they have tweaked the food for our sensibilities," Bhaskar told AFP.

There are also more than 1,000 products under 200 rupees to satisfy consumers whom John Achillea, store manager, said have "big aspirations for their homes and small wallets". A six-piece bowl set with cutlery for kids costs 131 rupees, for example. 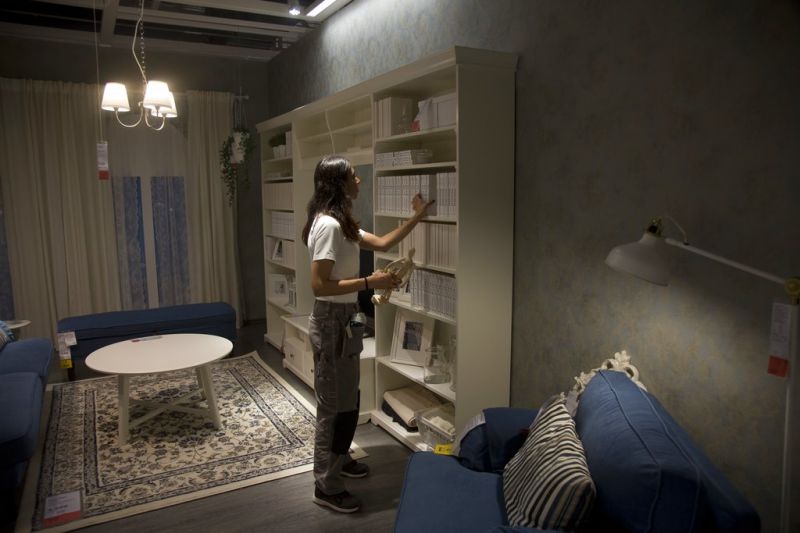 A staff arranges India’s first IKEA store ahead of its opening in Hyderabad on Wednesday. (Photo: AP)

The interior has a noticeable local feel too, with Indian-design bedspreads and framed photos of the Taj Mahal and other Indian monuments -- alongside Klimt's painting "The Kiss" recalling faraway Europe.

"We decided not to copy and paste," Juvencio Maeztu, IKEA'S finance chief, told AFP. "We met and interacted with 1,000 Indian families to understand what were their dreams, frustrations and what they want."

On Thursday, by midday the outlet was filled with people with more pouring in all the time, mostly just checking things out but with a few making their first purchases.

It was the living room section that attracted most attention with curious customers testing the softness of the sofas and stretching out on the king-sized beds.

A flop, I tell you

To overcome Indians' aversion to assembling their furniture, with people used to small, family-owned firms providing a bespoke service, IKEA teamed up with UrbanClap, an online platform connecting handymen with consumers.

After Hyderabad, IKEA plans to open outlets in the financial capital Mumbai next year, followed by Bangalore and New Delhi as it seeks to grab a share of India's estimated USD 40-billion home goods market.

But Satish Meena from Forrester Research said the firm will also have to adapt its offerings to the "extremely diverse" Indian market.

Also Read: As IKEA opens first store in India, here are 5 major challenges it will face

"No two states or cities have the same furniture demand and behaviour, lifestyle and culture vary from one region to another. Hence, IKEA will have to address space, pricing and design issues and pick products accordingly," Meena said.

Locals in Hyderabad not at IKEA were sceptical.

"I will wait and watch," Mohammad Noor, a businessman, told AFP. "I have never been to an IKEA store before. But I believe there it's all compressed wood. Indian wood is much better."

And Siddharth, who is in charge of a Hyderabad furniture shop and goes by one name, said IKEA might attract hard-up students but in general people would stick with "quality".

"It will be a flop, I tell you," he told AFP. "The regular furniture consumer will stick with the more solid wood available in the Indian market... I don't think it will give us much competition."