Stalkers arrest, a great move: Varnika thanks people for support

The Chandigarh Police said it has sufficient evidence to establish that the accused stalked, harassed Varnika Kundu. 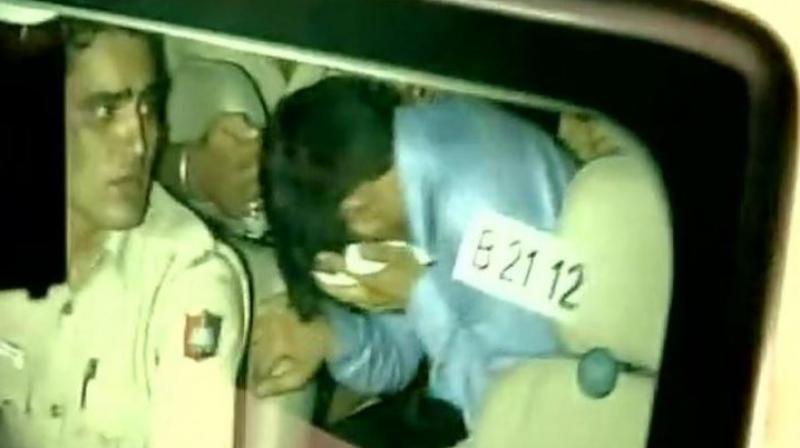 Chandigarh: Haryana BJP chief Subhash Barala's son Vikas and co-accused Ashish Kumar were arrested on Wednesday on charges of trying to abduct a 29-year-old-woman, the daughter of an IAS officer, the police said.

The non-bailable charge of attempting to abduct under section 365 of the IPC and section 511, which relates to attempt to commit an offence punishable with life or other imprisonment, had also been pressed against the two, a senior official said.

The accused will be produced before a court on Thursday, he added.

This is the second time that Vikas and his friend Kumar have been arrested in the stalking case, which has triggered a nation-wide outrage and a spate of protests.

The two were earlier arrested on Saturday following the woman's complaint but released on bail as they had been booked under bailable sections of the IPC and the Motor Vehicles Act.

"We had summoned both the accused and they were questioned for nearly three hours today during which many things came to the fore," Chandigarh DGP Tejinder Singh Luthra said.

The maximum punishment for the offence under the charge applied on Wednesday is upto seven years' imprisonment.

Asked about the reason behind adding the fresh charge, the DGP explained that in the last four days, the police had recorded the statements of witnesses and also examined CCTV footage.

"We reconstructed the scene of crime. We have also reconstructed the route of the chase and from there, many new facts, new evidences have emerged," Luthra claimed.
The two accused will now be produced before a court on Thursday and the police will seek their custody, he said.

"Because in this investigation, there are many things for which we require their custody...We will confront them with facts and the scene of crime, which was the route of the chase. It will be reconstructed along with the accused. Many facts will be confirmed in that process," he said.

Varnika Kundu, the woman who had lodged the complaint termed the arrests on Wednesday as a "great development".

Thanking everyone for their overwhelming support, she said "if we continue this movement, cases like these will get a lot rarer".

At the press conference, DGP Luthra was asked whether the accused were cooperating with the investigation,

"There are many things in the probe which I cannot share because if I do so it will hamper the investigation," the senior IPS officer said.

Luthra claimed that there was no political pressure on the police.

"Whatever we are doing, we are doing in a professional and objective manner," he said.
Earlier, Vikas reached the police station in Chandigarh to join the investigation in connection with the stalking case.

Amid heavy security at Sector 26 police station where the FIR has been lodged, the Haryana BJP chief's son and the other accused Kumar arrived in a white SUV at around 2:30 PM, amid rain.

The two were whisked away straight into the police station and grilled for nearly three hours.

Vikas reached the police station shortly after his father Subhash Barala addressed a press conference, saying "he will cooperate with the police investigation".

Congress and AAP workers held a protest outside the police station, condemning the stalking incident.

The police had summoned Vikas to join the investigation into the alleged stalking case. Vikas was asked to appear by 11 am, but he did not turn up at that time, a police official said.

Earlier, addressing media persons in the morning, DGP Luthra had said that police will ensure that the 29-year-old stalking victim gets justice.

He said that both the men had allegedly refused to give their blood and urine samples for medical examination.

The DGP claimed that the police had "sufficient" CCTV footage in connection with case.

"The accused are the law graduates and they are well versed with the law. They refused to give samples (blood and urine samples) to the duty doctor because they know that under law, they can refuse this," Luthra said.

"They know the law very well, therefore they refused to give these samples. However, in such circumstances, such refusal shall be held against them in the investigation and during the trial.

The high profile case had brought again the issue of women's safety on centre-stage and also put the Haryana BJP in an uncomfortable position with opposition attacking it over the incident.

The BJP's Haryana chief Subhash Barala had on Tuesday said that Varnika was like his daughter and assured that there was no pressure on the police from his or his party's side.