On Sunday, ITBP personnel administered oxygen to over 50 pilgrims who felt breathlessness at 12,000 feet during their arduous journey. 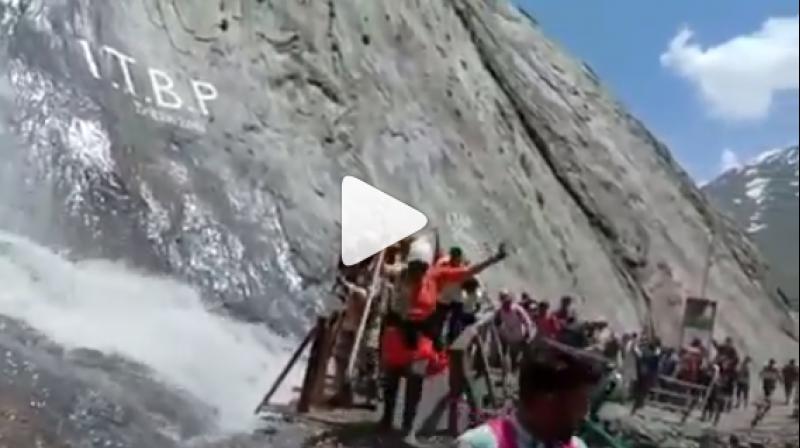 Situated at a height of 3,888 metres above sea-level, the Amarnath shrine houses an ice stalagmite structure that is believed to symbolise the mythical powers of Lord Shiva. (Photo: Instagram video screengrab | @itbp_official)

New Delhi: A new video shows security personnel of the Indo-Tibetan Border Police standing guard on dangerous terrain to protect the pilgrims headed to the famous cave shrine in Jammu and Kashmir's Amarnath.

Standing against cold water, strong currents and stones shooting down to a narrow path, the ITBP personnel formed a human wall to protect the pilgrims who were crossing the path near the Kali Mata point on the route to Amarnath from Baltal, one of the two base camps in Kashmir Valley.

Over 95,000 pilgrims have taken the Amarnath Yatra in the last seven days, since the pilgrimage season began on July 1. However, no fresh batch of pilgrims was allowed to move on Monday due to the law and order situation. The 46-day-long Amarnath Yatra will end on August 15.

On Sunday, July 7, the ITBP personnel administered oxygen to over 50 pilgrims who felt breathlessness at 12,000 feet during their arduous journey.

This year, there is high security for the Amarnath Yatra, with more than 40,000 security forces personnel deployed for the pilgrimage season. Union Home Minister Amit Shah had reviewed the security arrangements for the yatra during his visit to the state of Jammu and Kashmir in late June.

Situated at a height of 3,888 metres above sea-level, the Amarnath shrine houses an ice stalagmite structure that is believed to symbolise the mythical powers of Lord Shiva.

Pilgrims trek through mountains to reach the holy cave in the Himalayas in south Kashmir. The pilgrimage will end on August 15, the day of Shravan Purnima, according to the Hindu calendar.

The ice stalagmite structure waxes and wanes with the phases of the moon.

Jammu and Kashmir Governor Satya Pal Malik had said the annual pilgrimage has been possible with the support and assistance of the local Muslims.

All India Radio (AIR) is starting an FM radio station in the Baltal base camp to flash weather forecasts, traffic information and devotional content for the information of the pilgrims.