India   All India  09 Jul 2019  ‘Climbed over bodies to get out’: survivor on Yamuna Expressway bus tragedy
India, All India

‘Climbed over bodies to get out’: survivor on Yamuna Expressway bus tragedy

The survivor, Rishi Yadav, is a resident of Barabanki and is currently undergoing treatment at the Sri Krishna Hospital in Agra. 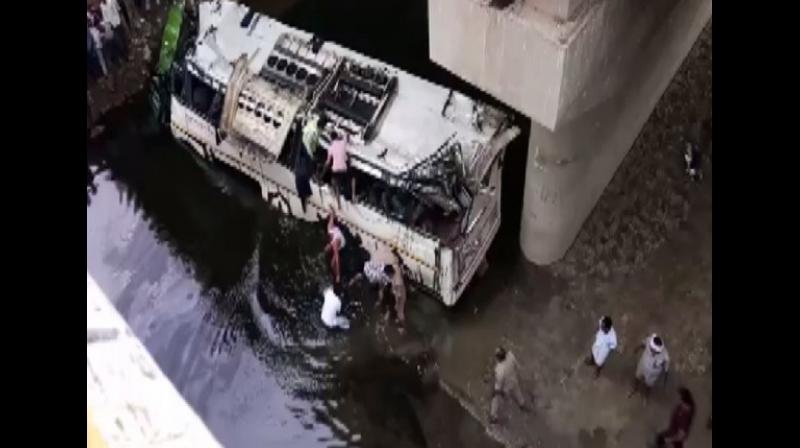 Some of the other survivors said that the bus was being driven at a speed of about 100 kmph. (Photo: ANI)

Agra: “We were all in deep sleep when the bus toppled twice before falling in the nallah (drain). Screams were heard for about a minute after which there was silence. Some passengers climbed on top of bodies to make their way out of the bus," said Rishi Yadav told news agency IANS.

Yadav is a survivor of the tragic bus accident on the Yamuna Expressway which killed 29 people on Monday morning.

The survivor, Yadav, is a resident of Barabanki and is currently undergoing treatment at the Sri Krishna Hospital in Agra.

The double-decker bus with 53 passengers on board was on its way to Delhi from Lucknow when it hit a divider and fell into the 40-feet-deep gap between two flyovers on the Yamuna Expressway near milestone 161 (Jharnanallah) under Etmadpur police jurisdiction of Agra district at around 4.15 am.

"The bus was speeding and the driver may have dozed off," Agra District Magistrate Ravi Kumar was reported saying by news agency IANS.

The local police have reported that there were no skid marks on the road. Some of the other survivors said that the bus was being driven at a speed of about 100 kmph. The impact was so deadly that one of the tyres burst under the pressure and the buss fell into the drain through the 40-feet-deep gap.

Police reports said that 20 passengers had been rescued and efforts were on to rescue the rest. Of the 30 dead, 19 have been identified. The injured have been admitted in various hospitals. Two of the injured are in coma and are yet to be identified.

"We are trying to identify all the victims. We will share, once we have all the details," said a senior police official in Agra, Bablu Kumar to IANS.

Ariba Khan's family lost its sole breadwinner. "She used to work in Navi Mumbai and was always fond of giving surprises. She had come home on June 10 after her father had a heart attack. Her siblings are younger than her," said her mother crying outside the mortuary.

The picture at the mortuary is terrible and heart-wrenching. There are weeping relatives and family members showing pictures and trying to locate their loved ones. Police officials are also running around with pictures of the unidentified deceased on their mobile phones to ascertain if their relatives had come.

Avinash Awasthi belonged to Lucknow and worked as a clerk in Greater Noida. "He had come to Lucknow on July 4 for his house warming ceremony and was on his way back to join his office from Monday. He is survived by his parents and a brother," said his relative.