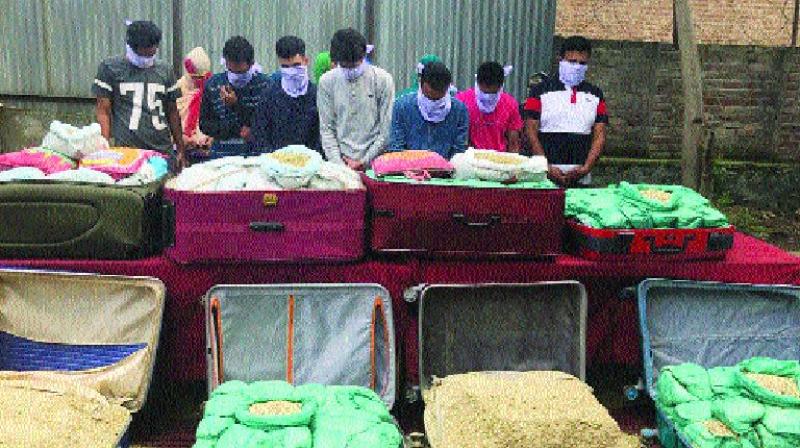 Fifteen people, including 8 women, allegedly part of an inter-state drug racket arrested by the J&K police along with huge quantity of ‘fukki’, a narcotic substance in Budgam district on July 2, 2018.

Srinagar: The law enforcing agencies’ campaign against narcotic crop cultivation in Kashmir Valley, particularly in its southern, parts has taken a backseat as fighting growing militancy is the top priority of the authorities. Also, most cultivators have enjoyed political patronage due to which the law has not been able to catch up with them.

Now, with the imposition of Governor’s Rule in Jammu and Kashmir following the collapse of the PDP-BJP government, many people hope that the administration will act against those behind the  menace of narcotic crop cultivation in the Valley.

Police officials privately said that what is needed is to break the cultivator-politician nexus and also to ensure no militant shields the growers to haul out money from them.

Quadruplet districts of Anantnag, Kulgam, Shopian and Pulwama in south Valley have over the years witnessed fast conversion of paddy fields into hemp cultivation ground.

A senior police official, who spoke to this newspaper on the condition of anonymity, said that poppy growers have been taking advantage of the police reluctance to move into the interiors of the southern districts, owing to growing hostilities between militants and the security forces.

The cultivation is carried out in apple orchards, besides raising oats or other crops around such cultivation, he said. Also many people have converted their paddy fields into hemp poppy cultivation grounds, he added.

The local sources said that the middlemen from within J&K and their counterparts from Punjab encourage Kashmiri farmers to grow poppy on their land as the crop is bought at `400 to 500 per kilogram by them.

They also smuggle charas out of the Valley to supply it to markets in Maharashtra and Goa where the quality hashish sells at `80, 000 to `100, 000 a kilogram. Though huge quantity of charas produced in the Valley is relocated to markets in far off Mumbai, Goa, Surat and Ahmedabad, hilly states of Himachal Pradesh and Arunachal Pradesh continue to be the major production source of hashish.

The illegal growers of hemp have taken advantage of the turbulence due to militancy over the past few decades, admit officials. Dealing with law and order situations remained a priority with the police during this period. The other official agencies supposed to act against the narcotic cultivators and dealers preferred to stay aloof and even turned a blind eye on their growing activities.

Many villagers who see cannabis cultivation taking place on their doorsteps say that it can not be discouraged mainly because of the dubious role being played by the local police.

“They accept bribes and turn blind eye to this menace,” alleged one of them. The villagers also complain that police officials receive commission from the cannabis cultivators, hence more and more land has been brought under cultivation over a period of time.

Police officials strongly denied it and said they have launched a “full-fledged war” against the drug menace not only in the Valley but the entire state. Terming it “narcotic terrorism”, the state’s director general of police Shesh Paul Vaid said, “The J&K police has waged a full-fledged war against it.It is a bigger challenge to us, bigger than fighting militancy, and we are meeting it head on.”

The other reason ascribed to illegal cultivation of cannabis is that most growers enjoyed political patronage from one or the other mainstream political party in power. For this reason, the police and other law enforcing agencies largely looked the other way.

Officials, however, claim that in 2016 and 2017 poppy and cannabis cultivated on about 650 hectares of land were destroyed during a “sustained” campaign launched by the state’s excise department. of the department.

Locals who are into this trade usually justify it with the need for poppy seeds in bakery products and for culinary use, but the real purpose of the massive cultivation seems to be extracting the husk, which is ground to make fukki, a narcotic substance prohibited under law. Officials said that growing of poppy is prohibited and any such cultivation needs licence from the government.