The two leaders will visit Samsung's manufacturing site which will be producing 10 million units of mobile phones per month by 2020. 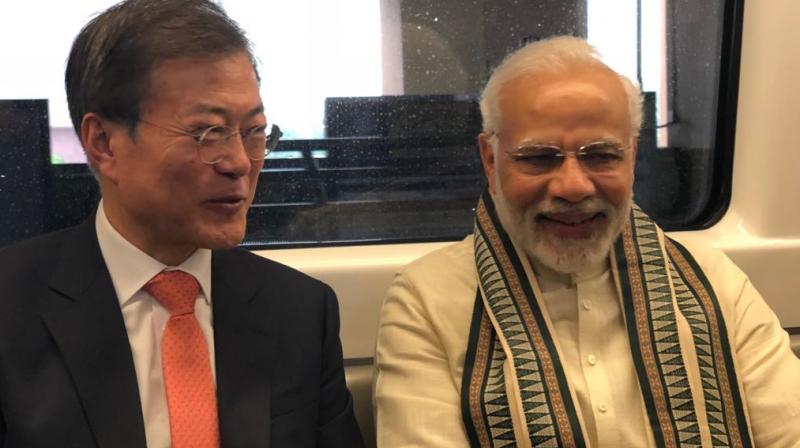 Prime Minister Narendra Modi with President Moon Jae-in, aboard the Delhi Metro, travelling to the inauguration of the mobile factory of Samsung in Noida. (Photo: ANI/Twitter)

New Delhi: Minister of External affairs, Sushma Swaraj on Monday called on visiting President of Republic of Korea, Moon Jae-in and held discussions with him.

The South Korean President is currently on a three-day visit to India, having arrived in New Delhi on Sunday evening. He and his wife, Kim Jung-sook, were received by Minister of State (MoS) for External Affairs General (retd) VK Singh.

President Moon then visited the Gandhi Smriti with Prime Minister Narendra Modi, from where the two leaders will travel to a Samsung plant in Noida. Moon is also scheduled to attend the India-Korea Business Forum later in the day.

On July 10, he will be accorded a ceremonial reception at the Rashtrapati Bhawan.

"Trade and commerce will play their own roles in taking bilateral relations between both the countries forward. We are going to take this relationship to a new level. We had a fruitful and forward looking discussion, some ideas have come to forward while some will work in progress," Prabhu told the media in New Delhi.

Earlier on Monday, both the ministers began their meeting with breakfast, after which the agreements were discussed and signed.

Meanwhile, Hyun-Chong highlighted on the Samsung plant in Noida and said that the site would produce almost 10 million units of mobile phones in the coming years.

"Keeping with Prime Minister Narendra Modi's 'Make in India' policy, the first step was taken today, both the leaders (South Korean President and Prime Minister Modi) will visit Samsung's manufacturing site which will be producing 10 million units of mobile phones per month by 2020," Hyun-Chong told media.

South Korean President Moon Jae-in and Prime Minister Narendra Modi later took the Delhi metro to travel to the inauguration of the mobile factory of Samsung in Noida, Uttar Pradesh.

#WATCH Delhi: South Korean President Moon Jae-in and PM Narendra Modi in the Metro while on their way to the Samsung plant in Noida pic.twitter.com/8FSTOK5jyg