India   All India  09 Jul 2018  Give justice to Nirbhaya, hang her rapists: mother
India, All India

Give justice to Nirbhaya, hang her rapists: mother 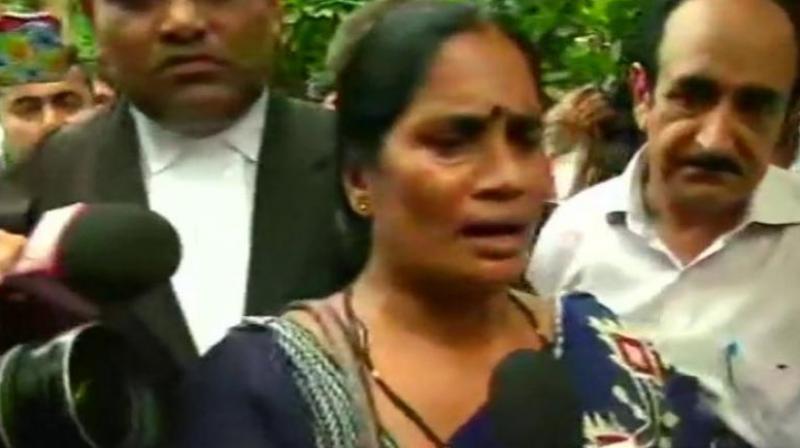 'This decision reaffirms our trust in the court that we will definitely get justice,' said mother of Nirbhaya, Asha Devi. (Photo: Twitter | ANI)

New Delhi: The mother of 23-year-old medical student who was brutally gangraped, tortured in a moving bus before being thrown on streets to die of Delhi on December 16, 2012, today welcomed the Supreme Court order that reaffirmed that the four men responsible for the henious crime will hang.

The apex court, which had upheld the death sentence for the convicts in May, 2017, was hearing a review plea from the accused requesting reduction of their death sentence to a life term.

"This decision reaffirms our trust in the court that we will definitely get justice," said mother of Nirbhaya, Asha Devi, who along with her husband was present in the court for the verdict today.

But she said, "Our struggle does not end here. Justice is getting delayed. It's affecting other daughters of the society. I request judiciary to tighten their judicial system, serve justice to Nirbhaya by hanging them (culprits) as soon as possible and help other girls and women."

"They were not juveniles. It is unfortunate that they committed such crime,"Asha Devi added.

"We knew that review petition will be dismissed. But what next? So much time has gone by and threat to women have gone up in this span. I believe sooner they're hanged, better it is," Badrinath Singh, father of 2012 Delhi gangrape victim told the media after the SC's verdict today.

National Commission for Women also welcomed the Supreme Court's verdict and called it a "landmark decision". "I welcome this decision as it proves justice can be delayed but not denied. It's a landmark decision. This judgement shows that law takes its own course in this country," Rekha Sharma, Chairperson of NCW told news agency ANI.

The Supreme Court today rejected an appeal for a reduced sentence and reaffirmed the death penalty for the accused in the rape and murder of a medical student in Delhi in 2012.

The four convicts will hang to death.

The review petition was filed by three of the four convicts.

While dismissing the review petition, the Supreme Court said that the death row convicts had failed to point out the "error" in the judgement. The convicts were heard elaborately during appeals and no grounds were made out for review of its verdict, the court added.

The 23-year-old medical student had gone to watch a movie with a friend in south Delhi and both were assaulted when they had boarded an empty bus to return home. The woman was gangraped by the six people present and violated with an iron rod when she protested. Her friend was beaten severely and both were thrown out of the bus at a secluded spot.

Fighting for life for days, the woman died on December 29, 2012 at a hospital in Singapore.

While one of her assailants died in jail, another - a juvenile - was tried by a juvenile justice board and released after he served his three-year sentence.

The other four men were sentenced to death.

The brutal incident on December 16, 2012, triggered public outrage and shock across India. It also led to major changes to laws on sexual crimes against women.