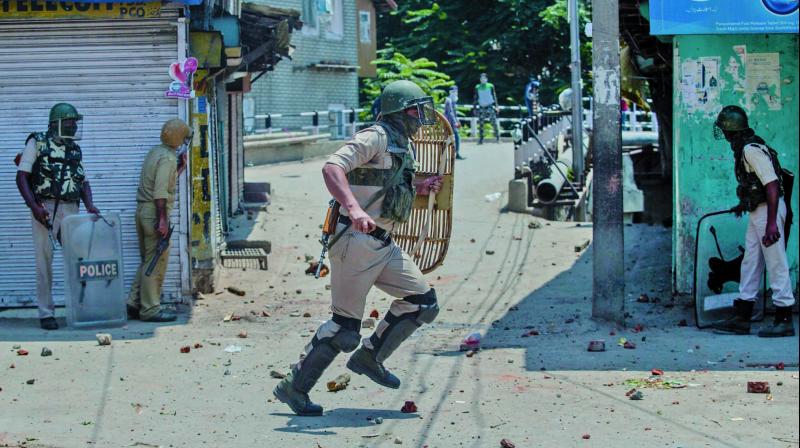 An Indian paramilitary soldier runs for cover as Kashmiri protesters pelt stones at him during a protest in Srinagar on Saturday. (Photo: AP)

Srinagar: Jammu and Kashmir police and Central paramilitary forces on Saturday enforced a security lockdown in major parts of Kashmir Valley to hold back rallies and protests on the first death anniversary of Hizbul Mujahideen commander Burhan Muzaffar Wani.

However, stone-pelting mobs clashed with security forces in places, including Central Srinagar and southern Shopian district, leaving over a dozen persons injured. One person was referred to a Srinagar hospital after he suffered pellet injuries in Shopian.

The authorities said that the overall situation remained “peaceful and under control”, contrary to apprehensions of widespread disturbances.

During a clash between a stone-pelting mob and security forces in Srinagr’s Rainawari, senior Central Reserve Police Force officer Sunil Kumar told this newspaper, “We, along with the J&K police, are trying to control the situation with minimum use of force. The crowd is very aggressive, but our resolve is to restore peace, and we are handling it (the situation) calmly and with restraint.”

Officials said curfew was imposed in southern Tral, the home town of Wani, the 22-year-old Internet-savvy poster boy of Hizb killed by the security forces in Anantnag on July 8, 2016, and also, in neighbouring Shopian and Trehgam town in frontier Kupwara district. Trehgam is the birthplace of Muhammad Maqbool Butt, co-founder of pro-independence Jammu Kashmir National Liberation Front who was hanged in Delhi’s Tihar jail on February 11, 1984, on charges of murdering an intelligence officer, Amar Chand, in Bumai, Sopore, in the mid-1960s.

Officials said restrictions under Section 144 CrPC remained in force in the summer capital of Srinagar and other major cities and towns of the Valley “as a precautionary measure”. However, residents said that curfew-like situation prevailed at most places, including Central Srinagar, as the security forces did not allow them to venture out of homes, even to buy food, for the second consecutive day.

In anticipation of violence, troopers from CRPF, Indo-Tibetan Border Police and Sashastra Seema Bal, along with the J&K police, sealed densely-populated areas by laying Concertina barbed wire and placing bunker-vehicles on roads.

Columns of Army and Border Security Force fanned out for area domination and to secure sensitive government installations, camps of security forces and other important sites.

In view of possible flare-up, the authorities had announced a 10-day “summer break” in educational institutions, asked service providers to block Internet services and placed separatist leaders and prominent activists under house arrest or detained them in police stations. Some of them, including JKLF chairman Muhammad Yasin Malik, were subsequently shifted to Srinagar Central Jail. Also, additional 21,000 Central paramilitary forces were airlifted from Delhi and other places.