The Siachen base camp is at an average altitude of nearly 18,000 feet. It is also one of the coldest battlefields in the world. 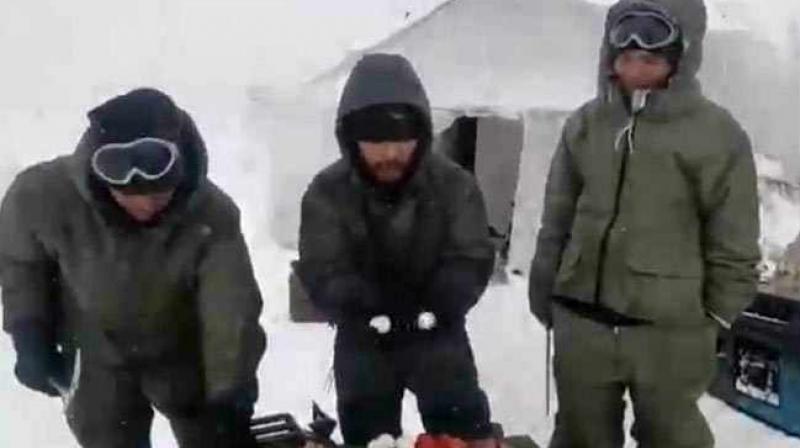 In a video that has gone viral, a few soldiers posted in Siachen demonstrate how hard it is for them to cook or consume food in the extremely cold weather conditions. (Photo: Facebook Screengrab | @IMA.Dehradun.Uk)

Mumbai: In a video that went viral recently, three jawans took turns trying to defrost vegetables, eggs and juice boxes all of which were as hard as ice. They smash them with hammers multiple times while talking of the challenges of surviving in a hostile terrain.

At the beginning of the video, a soldier rips open a box to reveal juice frozen like a brick inside. Then, another soldier hits the frozen juice with a hammer but it doesn't break.

After that, the soldiers try to break eggs, frozen as hard as stone, with a hammer. One soldier forcefully throws the eggs on a stone slab and yet nothing happens. "These are the kinds of eggs you get at a glacier," a solider jokes and his colleagues laugh. Similarly, they try to break onions, tomatoes, ginger and potatoes.

"The temperature plunges as low as minus 70 degrees. Life here is hell," one soldier says. Behind him is a view of their camp-a white expanse. Survival, for them, is no less than a war. From facing extremely chilly winds to making food-everything is a challenge for these army men posted along the Siachen glacier.

The Siachen base camp is at an average altitude of more than 18,000 feet. It is also one of the coldest battlefields in the world. Soldiers have to battle frostbite and icy winds. Avalanches and landslides are common at the glacier and the temperatures drop to minus 60 degrees.