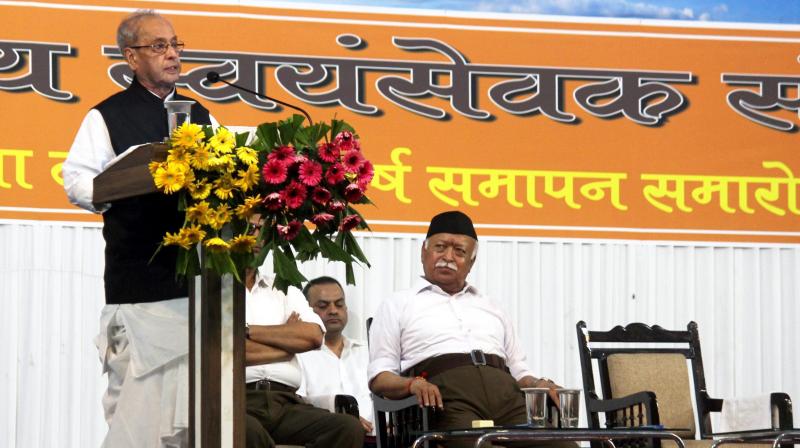 New Delhi: Minutes after former President Pranab Mukherjee spoke at the RSS headquarters in Nagpur Thursday, a morphed image of him assuming an RSS-style prayer position started doing the rounds on social media. Mr Mukherjee’s daughter and Congress leader Sharmistha Mukh-erjee, who had objected to his visit to the RSS headquarters, highlighted this and tweeted: “See, this is exactly what I was fearing & warned my father about. Not even few hours have passed, but BJP/RSS dirty tricks dept is at work in full swing!” The RSS, however, blamed “divisive political forces” for the morphed photograph, saying first they had tried to make the former President “refrain” from attending its event and then posted a morphed photograph showing him in a prayer position identified with the saffron outfit.

While veteran BJP leader L.K. Advani praised Mr Mukhejee for showing grace and goodwill in accepting the RSS’ invitation, Congress leader Manish Tewari questioned the former President over his visit, asking why he had chosen to go there and deliver “homilies on nationalism” after having cautioned young Congressmen like him against the Sangh.

A statement by RSS joint general secretary Manmohan Vaidya read: “Some divisive political forces have posted a morphed photo of former President Pranab Mukherjee standing in a prayer position with a folded hand during recitation of the Sangha ‘prarthana’ (prayer) at yesterday’s RSS function at Nagpur.”

The RSS claimed these forces had “initially tried to create an opposition to make Mukherjee refrain from attending this function, and now these frustrated forces are indulging in all such dirty tricks to defame the RSS. We denounce and strongly condemn the lowly act of these divisive political forces who are deliberately trying to defame the RSS.”

Despite the official reaction of the Congress after Mr Mukherjee delieved his speech at the RSS headquarters, Congress leader Manish Tewari posed some stinging questions to the former President, asking him what was evil about the RSS then that has now become virtuous, and if the former President was trying “to mainstream” the Sangh.

“Your generation cautioned mine in training camp after training camp through 1980s and 1990s about the intent and designs of the RSS. You were a part of the government that banned the RSS in 1975 and then again in 1992. Don’t you think you should tell us what was evil about the RSS then that has become virtuous now?” he asked.

Drawing parallels, he said after the 1938 Munich pact, other countries had the false notion that they had bought peace with Nazi Germany, which then overran Europe. He told the veteran Congressman that whatever the motivation behind the visit, it will be seen as an attempt to mainstream the RSS in the secular and pluralistic consciousness.