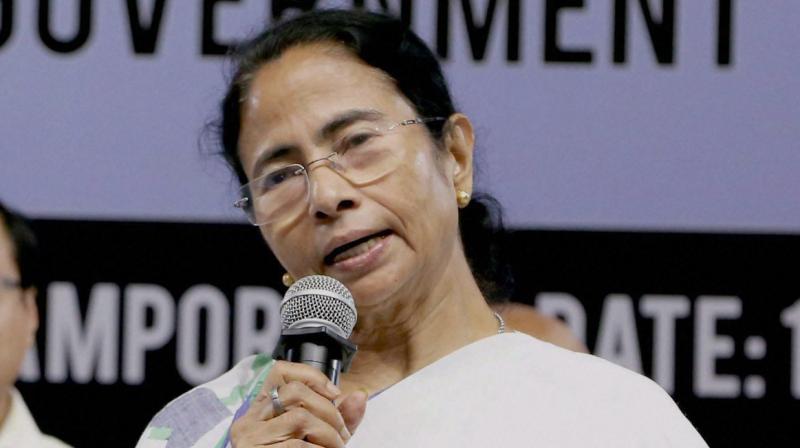 Darjeeling (West Bengal): West Bengal Chief Minister Mamata Banerjee described the 12-hour-long strike called by the Gorkha Janmukti Morcha (GJM) on Friday as "illegal", saying the government would take legal action against those who participate in it.

The strike, however, almost stalled life in the hills this morning with most of the shops, eateries and markets remaining closed and vehicles off the roads.

"Strike, bandh cannot be called for every other issue. This cannot be a message of peace," said Banerjee, who decided to stay put in the hills after yesterday's clash between GJM supporters and police forcing the deployment of Army here.

The chief minister walked around the area early this morning and took stock of the situation.

"I have been roaming around the area since morning. I have seen the manner in which the vehicles have been set on fire. There was no issue or any incident. We want peace and development in the hills. The Army has already started route march. Law will take its own course," she said.

Assuring the tourists stranded in Darjeeling town that the government will help them in all possible ways to return to the plains, Banerjee said, "I will ask the tourists not to
worry, the government is there for you. We have full support for tourists specially. There will be seven-eight buses which will take you to Siliguri."

GJM supporters during the clash yesterday tried to break the barricades put up by the police and hurled bricks at them following a police lathi charge. The GJM supporters damaged police vehicles and set some of them ablaze as the state government held a Cabinet meeting at the Raj Bhawan.

The GJM supporters were protesting among other issues alleged "imposition of Bengali language in the schools in the hills".

On what kind of action the government was planning against GJM chief Bimal Gurung, who led Thursday's protest march towards the Raj Bhavan, Banerjee said, "Police will do their work and law will take its own course. Nobody is above law. And government is very tough. They will take action against those who are doing this vandalism."

"Situation is still good here.. This is happening only because of a few people... Government will take legal action against them."

She further said that the Gorkhaland Territorial Administration (GTA) under Gurung has failed to carry out any development work in the Hills and now when their term is
scheduled to be over next month, they have started "torturing the public".

"They (GJM) were in power since five years but have failed to do any development work for the people of the hills. Their term will be over by July and there is only one month
left for the GTA elections. And because they have failed to do
anything for the public they have started this torture," Banerjee charged.

"Government was soft and had given them all kind of support but now government will be very tough after what has happened yesterday. The government will not going to tolerate all these," she said.

Stating that the state government has full support for the people from the area, she urged them not to support Bimal Gurung on this issue.

The GJM in the name of their movement were scaring away tourists from the hills thus driving away income from the area, she added.

"They (GJM) are driving away 'Lakshmi' (Goddess of wealth) from the Hills. I cannot understand what kind of movement they are upto. We are with the brothers and sisters
of the hills and will give them full help and ask them not to give support to Bimal Gurung," Banerjee said.