Minister in a soup over ‘yoga break’ amid crisis

Though the BJP officially refused to comment on the matter, sources revealed that the party’s top leadership was miffed with the minister. 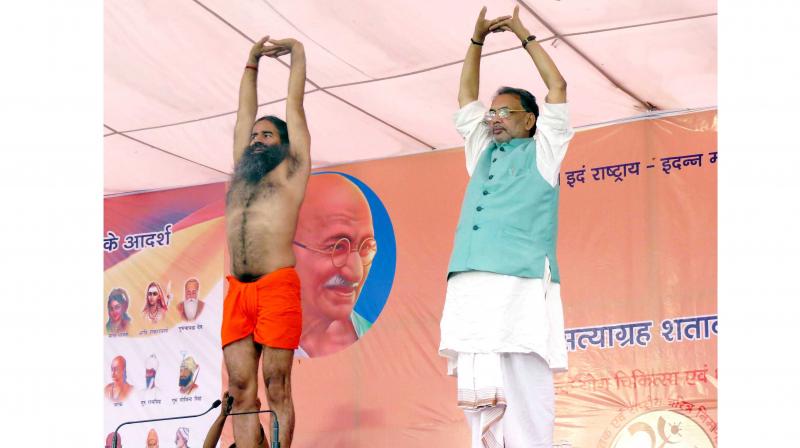 New Delhi: Union agricultural minister Radha Mohan Singh was in the eye of a storm as he was seen practicing yoga with Baba Ramdev at a time when protests raged in Madhya Pradesh and other parts of the country over the killing of five farmers in police firing in Mandsaur.

Mr Singh was seen doing yoga in Motihari, Bihar, at a three-day special yoga camp organised by Ramdev. In his address to the gathering, the minister said yoga guru Ramdev had invited him to Motihari for a visit after a conversation on Mahatma Gandhi’s Satyagrah at Champaran.

The farmers’ protest has snowballed into a major issue with the Opposition, specially the Congress, taking it up in a big way. Congress vice-president Rahul Gandhi also visited the area and courted arrest. So did other top leaders like Sachin Pilot, Kamal Nath and Digvijay Singh.

The agriculture minister also cancelled a press conference on Wednesday which was supposed to be held on his ministry’s achievements in the three years of the Modi government.

CPI(M) general secretary also took a dig at the cancellation of the press conference.

“Such a brave government, takes no questions. Its agriculture minister cancels three-year celebration press meet. No briefing after cabinet meeting either (sic),” the CPI(M) leader tweeted.

Though a red faced BJP officially refused to comment on the matter, sources revealed that the party’s top leadership was miffed with the minister.