India   All India  09 Jun 2017  Army out in Darjeeling as GJM attacks police
India, All India

Army out in Darjeeling as GJM attacks police

Trouble broke out soon after Mamata Cabinet met in the Hills, first in 45 years. 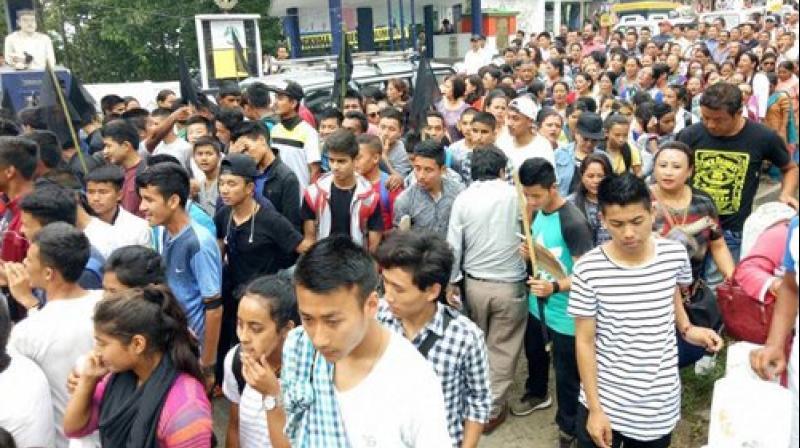 Kolkata: Violence and anarchy erupted in the Darjeeling Hills on Thursday with Gorkha Janmukti Morcha supporters involved in violent clashes with the police. A number of police vehicles were torched and several police officials injured as GJM supporters allegedly hurled bombs and threw stones. West Bengal CM Mamata Banerjee and over two dozen of her ministers were only half a kilometre away from the spot where the violence erupted as she held the first state Cabinet meeting in the Hills after a 45-year gap. The administration called in the Army as the police found it tough to bring the situation under control. “Two Army columns based in Darjeeling were pressed into service after receiving a requisition from the state government,” a senior Army official at the Eastern Command headquarters here said.

Clashes erupted soon after Ms Banerjee left Raj Bhavan in Darjeeling, where she chaired the Cabinet meeting. The police resorted to a lathicharge and fired teargas shells to disperse the violent mob. The agitators held a dharna, raised slogans against the chief minister, tried to damage the barricades and hurled brickbats. A number of GJM supporters were arrested. The maximum violence was seen in front of Bhanu Bhavan, where the GJM supporters were holding a rally to seek a separate state of “Gorkhaland” and demand a written assurance from the Mamata Banerjee government that it would not “impose” the teaching of Bengali in the North Bengal hills and that it could be studied as an optional language. Ms Banerjee, immediately after reaching the Hills on Monday, had made it clear at Mirik that Bengali would not be made compuslory in the Hills, and that it would be optional.

Tourists were severely inconvenienced by the clashes and were compelled to stay confined to their hotel rooms. Many who had left for sightseeing in the early morning came down to the plains after hearing that the situation had got really tense in the Hills. In the wake of the Morcha calling a 12-hour bandh on Friday protesting against the alleged “police excess”, the state transport department said in the evening it would run special buses from the Siliguri bus stand every two hours from 6 am to 6 pm on Friday to take passengers to Kolkata. Bagdogra airport will be open for passengers from 5 am on Friday morning, and food will be available at the snack bar, it was officially announced.

Gorkha Janmukti Morcha chief Bimal Gurung said the Trinamul Congress was trying to “dilute” the real issues affecting the hills and threatened to revive the agitation for a separate “Gorkhaland”. He said: “In the next few days, the Gorkhaland movement will start. The people of the hills are still with the GJM. We are unitedly fighting for Gorkhaland.”

Reacting to this, the chief minister said: “They have the democratic right. Let them do it. They have no issue. Let there be competition over development. The GJM has done little development in the Hills.” On Monday, the CM accused the GTA of misusing government funds.

The chief minister announced a number of development projects in the Hills, including the setting up of a mini-secretariat named after legendary mountaineer Tenzing Norgay. She also announced a new polytechnic college and a skill development centre at Mirik.

State Congress chief Adhir Chowdhury said the violence in Darjeeling was a “show of strength” between the CM and GJM chief Bimal Gurung. “Mamata Banerjee did not recognise the verdict of the hill people... and this aggravated the situation. I am concerned for the safety of tourists. The CM should restrain herself from making any provocative comments,” Mr Chowdhury added.