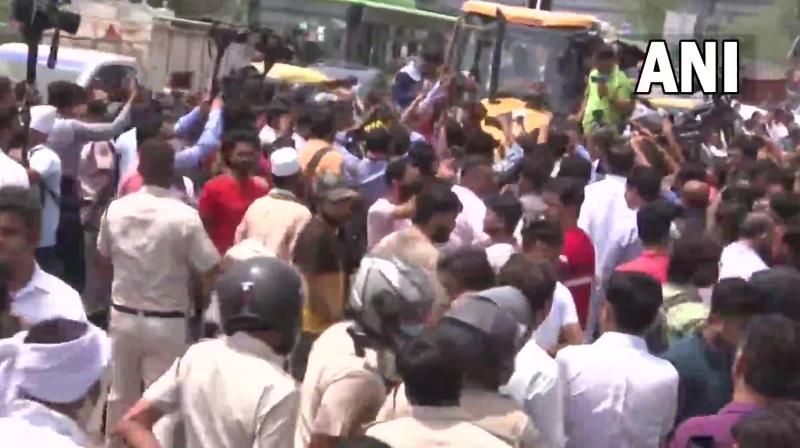 Delhi | Locals sit on roads and stop bulldozers that have been brought for the anti-encroachment drive in the Shaheen Bagh area. (ANI)

The protests erupted as bulldozers rolled into the area in the presence of a huge number of police personnel, including senior officers, causing traffic snarls at Shaheen Bagh, Kalindi Kunj, Jaitpur, Sarita Vihar and Mathura Road, among other places.

The traffic police assisted the local police to ensure that no inconvenience was caused to the commuters and traffic diversions were made accordingly.

"The heavy vehicles were first diverted and an alternative route was suggested for such vehicles. Our men were deployed at the spots where congestions were reported to ensure that no inconvenience was caused to the commuters. We diverted all the vehicles going towards Shaheen Bagh towards GD Birla Marg via Kalindi Kunj and then towards Crown Plaza and vice versa," a senior traffic police officer said.

Even as the protests were going on, one of the carriageways was kept open for vehicular traffic, while another alternative route suggested was via Mathura Road, he added.

"The situation is under control now and vehicular movement has resumed," the officer said.

Following the protests, the SDMC officials returned with the bulldozers, without carrying out the exercise, an official said.