Congress however preferred to steer clear of the controversy by keeping mum on the issue. 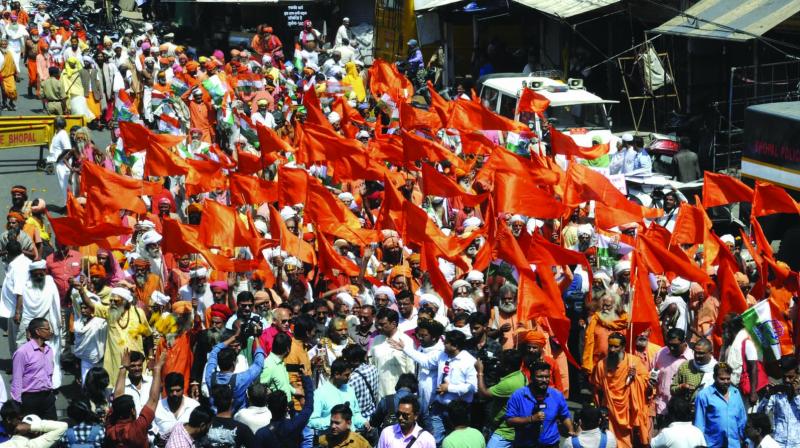 Bhopal: Police personnel deployed at a rally of seers hosted by Congress veteran Digvijay Singh, who is contesting from Bhopal Lok Sabha constituency in the May 12 polls, here on Wednesday were caught sporting saffron scarves.

The “exposure” has caused acute embarrassment to Congress.

Madhya Pradesh police however issued a clarification saying that those found wearing saffron scarves might be volunteers hired by the department to maintain law and order on the occasion and they were at liberty to wear clothes of their choice.

Congress however preferred to steer clear of the controversy by keeping mum on the issue.

A day after Namdas Tyagi aka Computer Baba organised a “hot yagna” (rituals held in hot and humid conditions) here to invoke divine intervention for Mr Singh’s victory in the polls, the Congress leader hosted a road show of seers here to flaunt backing of Hindu religious leaders to his candidature.

Computer Baba had mobilized seers from different parts of the country to participate in the rally. Around 1500 ‘sadhus’, besides Congress workers, participated in the rally.

Interestingly, some of the seers attending the rally were seen holding Congress flag and raising slogan in favour of Congress president Rahul Gandhi.

The event however landed in controversy when several police personnel, some of whom were female cops, deployed at the rally were spotted wearing saffron scarves.

Saffron scarf wearing “cops” were in civil dress. Some of them admitted before the reporters that they were forced to wear saffron scarves.

A group of people greeted the rally by chanting “Modi” when it reached a posh locality in the city. Police lodged FIR against eight people in connection with the incident. Mr Singh is pitted against Sadhvi Pragya of BJP in Bhopal.