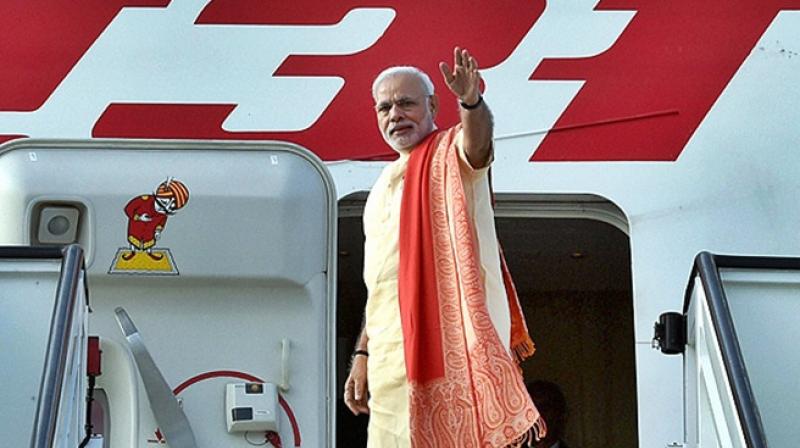 RTI applicant Lokesh Batra had sought to know dates, durations, places visited and the date-wise copies of bills raised by Air India to the PMO for 2016-17. (Photo: PTI)

New Delhi: The chief Information Commission has directed the Air India to disclose complete records related to bills raised for the foreign visits of Prime Minister Narendra Modi, underlining that since the expenditure is from the public exchequer it cannot be withheld under the "cloak" of commercial confidence and fiduciary capacity.

The commission rejected the arguments of Air India's central public information officer (CPIO) that the information relates to commercial confidence and is held by the public sector undertaking in a fiduciary capacity, making it exempt from disclosure.

"Moreover, by no stretch of imagination, it can be acceptable that the information regarding dates, duration and places of visit by the PM in his official capacity are exempted u/s sections 8 or 9 of the RTI Act (the exemption clauses)," Information Commissioner Amitava Bhattacharyya ruled.

He said each individual bill as well as the dates of receipt of amounts should be disclosed as the same involved "expenditure out of public exchequer".

Bhattacharyya noted that Air India's denial to part with the sought for information without citing any exemption clause under the RTI Act is "not acceptable" as a "justifiable denial of information" sought by RTI applicant Lokesh Batra.

"CPIO (Air India) on one hand claimed that the sought for information is related to a matter of commercial confidence and on the other hand he stated that the information sought for is maintained by Air India in a fiduciary capacity," he observed.

Batra had sought to know dates, durations, places visited and the date-wise copies of bills raised by Air India to the PMO for 2016-17.

"The commission after close scrutiny of the information sought by the appellant observed that dates, duration and places of the Prime Minister's foreign visits are disclosable as these details are widely reported in the media, both national and international, both print and electronic," Bhattacharyya said.

He said the commission is not convinced with the CPIO's submission of exemption under the "cloak of commercial confidence and fiduciary relationship" with the client concerned, which in this case is another wing of the same government.

In response to a separate RTI application of Batra, filed recently, seeking similar information from Air India, the national carrier had cited an instruction from the PMO to not share information related to the Prime Minister's foreign visits.

In an e-mail, sent to an Air India official on December 26, 2016, the PMO had said, "Records pertaining to PM's flight have certain information which may have security implications and are, hence, exempted from disclosure under clause (g) of Section 8(1) of the RTI Act, 2005."

"As such, the Air India is advised not to disclose information relating to PM's flight to such RTI queries," it said.

It was not clear what had prompted the PMO's e-mail in 2016. However, the present RTI application in which the commission has given orders to disclose was filed on September 14, 2016.